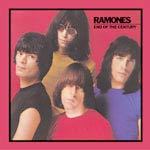 Ramones
End Of The Century

Available as an American import, this expanded special edition includes the original 12 songs, plus demos and the soundtrack version of "I Want You Around".

Do you remember rock 'n' roll radio? The Ramones did. They paid tribute to the pop sounds of the '60s with this Phil Spector-produced classic from 1980.

If you think of the Ramones as loud and stupid, you're only half right. By their 2,263rd and final concert in 1996, these punk forefathers had outsmarted and outlasted their detractors. And better yet, ever since they rocketed out of Queens in 1974, the Ramones have inspired countless kids worldwide to pick up guitars and rock. Bringing a bubblegum sensibility to the fast-and-hard, their primal sound is considered a blueprint for all things resembling snotty, catchy, ear-bleeding punk rock. Gabba Gabba Hey!

This expanded special edition includes the original 12 songs, plus demos and the soundtrack version of "I Want You Around".