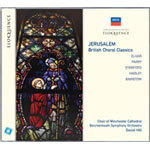 "In all, this is a nice representation some of the core repertoire of the Anglican Church; but again, these ears would have appreciated much more variety, and dare I say it, mature female voices, especially given the big orchestrations."
(MusicWeb Jan 2006)

Recorded in the splendidly lush acoustic of Winchester Cathedral, this popular Decca/Argo release is now restored to circulation at super-budget price. With such popular favourites as Parry's I was glad and Elgar's orchestration of Jerusalem it is sure to win a new audience, but there are also many other pieces for choir and orchestra here to be discovered.

'Finally Jerusalem itself comes as the culminating tableau, with the solidity of massed unison voices and the flaming chariots and swirling arrows of desire set ablaze in the orchestral score which Elgar wrote for it four years after Parry's death. [...] This is a sumptuous programme, and David Hill's by no means meagre forces present it with a fine sense of style and occasion, vividly recorded too. There is not only the splendour of sheer amplitude but also a spring in the rhythm (as in Stanford's Magnificat) and beauty of tone in the quieter passages such as the hymn from Parry's Judith.' Gramophone