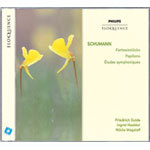 "Stunning interpretations of three of Schumann's most rewarding solo piano compositions. Friedrich Gulda's aggressive performance of the Fantasiestücke might raise a few eyebrows, but it is entirely idiomatic of Schumann's alter-ego Florestan. Overall, one of the most compelling Schumann discs on the market."
(MusicWeb Recordings of the Year 2006)

Three wondrous Schumann piano works - none of these recordings currently available - are coupled on a single CD. Gulda's iridescent Fantasiestücke was issued in the early days of the CD. Haebler's beautifully-shaded account of Papillons receives its first release on CD (outside Japan, where it is also currently unavailable) and likewise Magaloff's Études symphoniques (only ever issued in France, and no longer available).