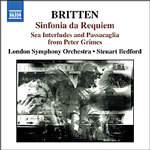 Benjamin Britten occupies an unrivalled position in English music of the twentieth century and a place of the greatest importance in the wider musical world.

While Elgar was in some ways part of late nineteenth-century German romantic tradition, Britten avoided the trap offered by musical nationalism and the insular debt to folk-music of his older compatriots, while profiting from that tradition in a much wider European context. He may be seen as following in part a path mapped out by Mahler. He possessed a special gift for word-setting and vocal writing, a facility that Purcell had shown and that was the foundation of a remarkable series of operas that brought English opera for the first time into international repertoire. Tonal in his musical language, he knew well how to use inventively, imaginatively, and, above all, musically, techniques that in other hands often seemed arid. His work owed much to the friendship and constant companionship of the singer Peter Pears, for whom Britten wrote many of his principal operatic rôles and whose qualities of voice and intelligence clearly had a marked effect on his vocal writing.

Born in the East Anglian seaside town of Lowestoft in 1913, Britten showed early gifts as a composer, studying with Frank Bridge before a less fruitful time at the Royal College of Music in London. His association with the poet W.H.Auden, with whom he undertook various collaborations, was in part behind his departure with Pears in 1939 for the United States, where opportunities seemed plentiful, away from the petty jealousies and inhibitions of his own country, where musical facility and genius often seemed the objects of suspicion. The outbreak of war brought its own difficulties. Britten and Pears were firmly pacifist in their views, but were equally horrified at the excesses of National Socialism and sufferings that the war brought. Britten's nostalgia for his native country and region led to their return to England in 1942, when they rejected the easy option of nominal military service as musicians in uniform in favour of overt pacifism, but were able to give concerts and recitals, often in difficult circumstances, offering encouragement to those who heard them. The re-opening of Sadler's Wells and the staging of Britten's opera Peter Grimes started a new era in English opera. The English Opera Group was founded and a series of chamber operas followed, with larger scale works that established Britten as a composer of the highest stature, a position recognised shortly before his early death by his elevation to the peerage, the first English composer ever to be so honoured.

The earliest of the works here included is the Sinfonia da Requiem, written in response to a commission in the autumn of 1939 from the Japanese government for a work to mark the 2,600th anniversary of the founding of the imperial dynasty. The occasion was to include new compositions by Richard Strauss, Jacques Ibert and Sándor Veress, but Britten's symphony was rejected by the commissioning committee, who took exception to the nature of the work and its apparent Christian content, although it had initially received approval. Britten had, in any case, resolved to write a composition imbued with as much of the spirit of pacifism as was possible. The official concert duly took place in Tokyo, with Britain unrepresented, and Strauss at his most bombastic. In the event the Sinfonia da Requiem, dedicated to the memory of Britten's parents, had its first performance in March 1941 at Carnegie Hall in New York, with the Philharmonic Symphony Orchestra conducted by John Barbirolli.

Britten, in his programme notes for the first performance, described the opening movement, Lacrymosa, as a slow marching lament with three principal motifs, the first heard from the cellos answered by a solo bassoon, the second based on the interval of a major seventh and the third alternating chords on flute and trombones. The first section leads to an extended crescendo and a climax based on the first motif. The second movement, Dies Irae, which follows without a break, he describes as a Dance of Death. It leads directly to the final Requiem Aeternam, with its principal melody announced by the flutes, finally returning before the sustained clarinet note with which the work ends.

Peter Grimes had its first performance at the reopened Sadler's Wells Theatre in London in June 1945. In California in 1941 Britten had come across an article by E.M.Forster on the poet George Crabbe, adding to his own feelings of nostalgia for his own part of England. Crabbe's poem The Borough, set in Suffolk, provided a source for the opera. The fisherman Peter Grimes, an outsider, suspected by his fellow-townspeople of cruelty to his apprentices, is hounded to his death. The drama, and the death of Grimes's last apprentice, the result of the actions of the people of the borough, is set against the sea in its varying moods, elements familiar to Britten from his childhood by the sea in Lowestoft. The Four Sea Interludes divide the scenes of the opera. The first of these, Dawn, with its sea-gull cries above the waves, introduces the first act, as fisherfolk mend their nets and prepare their sails for the day to come. The second of the four, Sunday Morning, introduces Act II, with its church bells and bright sunshine, as townspeople gather before church, their self-righteous hypocrisy in contrast to the genuine emotions that will be played out between Grimes and the schoolmistress Ellen Orford, who tries to protect him. Moonlight begins the third act, the shore and village street lit by the moon, as a dance takes place in the Moot Hall, a scene in which the hypocritical character of those who condemn Grimes becomes ever more apparent. Storm is taken from earlier in the opera, between the first and second scenes. Balstrode, a fisherman, gives Grimes friendly advice, urging him to marry Ellen, this against the sounds of a rising storm. In what follows people gather in The Boar Inn, where Grimes's arrival, either mad or drunk the people say, is unwelcome. The Passacaglia comes at a moment of dramatic climax, between the first and second scenes of Act II. In the first scene the people, incited to revenge on Grimes for his maltreatment of his new apprentice, set out towards his hut; in the second Grimes, ambitious to make money, the only thing others respect, urges his apprentice down the cliff to set out fishing, as the people of the borough make their threatening approach. The Passacaglia theme itself echoes Grimes's own words, after his quarrel with Ellen, 'God have mercy upon me', while the solo viola of the first variation speaks for the mute apprentice.

Gloriana was written, as the result of conversations between Britten, Peter Pears and his friends Lord and Lady Harewood, for the coronation of 1953, with a libretto by William Plomer, and a plot taken largely from Lytton Strachey's Elizabeth and Essex. Like Billy Budd, which had been staged at Covent Garden in connection with the 1951 Festival of Britain, it deals with conflict between personal feelings and duty, as Queen Elizabeth has no choice but to condemn her impetuous young favourite, the Earl of Essex, to death. It is hardly necessary to repeat stories about the first night, a royal gala performance before an uncomprehending audience, described by a leading member of the cast as 'cold fish'. Possibly the jingoism that Britten had openly avoided in the Sinfonia da Requiem would have better suited the occasion. Here, however, was a serious opera, that, nevertheless, had its elements of royal courtly pageantry.

Britten arranged the Symphonic Suite from the opera in the later months of 1954, with the help of Imogen Holst. It opens with The Tournament of Act I, where Essex, jealous of the success of Mountjoy in combat, fights with him. The Lute Song, reflecting the idiom of Dowland, is given, in the suite, to a solo oboe, accompanied by the harp, in the opera the second lute song sung by Essex to the Queen in the second scene. The Courtly Dances are taken from Act II, where courtiers dance in the Palace of Whitehall, a scene in which Essex seems deliberately to provoke the Queen, leading to the humiliation of his wife. Gloriana Moritura is based on the end of the opera, where the Queen faces her own death.