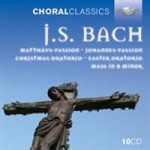 "This boxed set is perfect for those people wishing to get to know Bach's Passions. Cleobury's performances of the St. Matthew and the St. John are good steady musical performances. Many people will be attracted to this disc by the name of King's College Choir and they will not be disappointed"
(MusicWeb Nov 2004)

This set brings together the 5 large scale choral works which marked Bach as one of the greatest creative geniuses of mankind: Matthäus and Johannes Passion, B minor Mass, Weihnachtsoratorium and the Easter Oratorio.

The box set begins with the St Matthew and St John Passions - works that narrate the story of the Crucifixion according to the Gospels and which, due to their enormous scale and quasi-operatic structure, must have struck listeners as extremely novel in their time. Moving on, we encounter the Mass in B minor, Bach's grandiose setting of the Roman liturgy, and this is followed by the Easter Oratorio - a celebratory, largely contemplative work in tone that, complete with festive scoring, narrates the story of the Resurrection. Bach's Christmas Oratorio completes the line-up; the second of the three oratorios he composed, it's an extensive piece divided into six parts, which documents the whole period of festivities from Jesus' birth right through to Epiphany.

Detailing a huge variety of instrumentation, matchless invention and many vigorous affirmations of Christian faith, this compilation brims with dramatic energy and depth of expression. From intimate solo passages to the full forces of chorus and orchestra, all of the works are admirably performed on the release, making it an essential buy for the Bach connoisseur.

- Performances of the highest artistic and technical standard, by world famous choirs such as the King's College Choir Cambridge, the Coro della Radio Svizzera, and conductors Stephen Cleobury and Diego Fasolis.