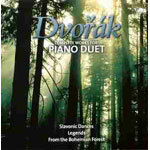 "These are certainly not the only performances of this delightful body of work but they are certainly rhythmically snappy, tonally pleasurable and attractively, if not opulently, recorded. And it's a delight to become reacquainted with the original piano versions of works (duet - four hands) now more familiar to us in their orchestral raiment. It's noticeable that rubati never seem forced or over-prepared - sample the second of the Op.46 set of Slavonic Dances for their naturalness in this respect. They also contrive to bring out the verdant wit in the scores (the Allegretto scherzando, No.3 from the same set) and keep second subjects on a good rein, neither too indulgent nor too brusque (the Odzemek, Molto Vivace opening Dance of Op.72 for instance). Crispness of rhythm is there as well - try the gorgeous Skocná, No.3 from the latter set - and grandeur and unanimity of phrasing in the imposing introduction to No.5 of the same set, an Adagio introduction of compelling concision.

Similarly with Legends, a descriptive and colouristic set. Textures are aerated; attacks are euphonious and always synchronous. There's subtlety in their phrasing of the C major Molto maestoso as there is stabbing urgency in the C sharp minor [No.6]. The vivacity of the sets of Dances is recalled in the Andante con moto. From the Bohemian Forest, a cycle of six includes Silent Woods, better known in its guise for cello. There's delicacy, drama and tension here a-plenty.

Sometimes some of the rhythmic subtleties could be more pronounced - I'm thinking of the Dumka of the Slavonic Dance Op.72 set [No.2 E minor, Allegretto grazioso] and here they do cede to the Hrsel duo (Praga). And when it comes to Legends and From the Bohemian Forest it's certainly true that a native pairing of Renata and Igor Arda∫ev - the latter a fine exponent of the solo Czech repertoire - scores higher in matters of texture and delicacy (Supraphon 3536-2 131). But the fact remains that this ridiculously cheap Brilliant box gives us consistently generous performances, idiomatically played, of music that moves irresistibly through the bloodstream infusing the body with its infectious brio."
(MusicWeb Oct 2004)