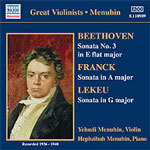 Collectors always have a soft spot for gramophone premières. Yehudi and Hephzibah Menuhin were the first to record the large-scale Sonata in G major by the tragic Belgian composer Guillaume Lekeu (1870-94), who died a day after his 24th birthday, and so their names will always be associated with it.

There is, however, another 'first' attached to their interpretation of this work, on Yehudi's side at least: it was the first work he subjected to close analysis. During his world tour in 1935 he was on a small ocean liner crossing from Perth, Australia, to Durban, South Africa, and looking at the score of the Lekeu, to which he had been introduced a few years earlier by the pianist Alfred Cortot. It suddenly occurred to Menuhin that he was dissatisfied with just playing music instinctively. 'Like a biochemist discovering that every human cell bears the imprint of the body it belongs to, I had to establish why these notes and no others belonged to this sonata; and it was important that I do it myself, no more accepting ready-made explanations than I would consider myself acquainted with someone at second hand. I would track Lekeu's inspiration from the first note of his sonata to the second, thence to the third, and eventually to the last, explaining each in terms of what preceded it; and thus (I hoped) basing the shape I gave his phrases, the speed, the volume and the relation between these factors, on certainty.' Without a doubt, this study, and the concert performances brother and sister gave on that tour, contributed to the success of the recording they made three years later.

Hephzibah Menuhin was born in San Francisco on 20th May 1920 and made her début there in 1928. Among her teachers were Adolf Busch's sonata partner Rudolf Serkin in Basel and Marcel Ciampi in Paris. She started playing sonatas with Yehudi in 1933, recorded Mozart's Sonata in A major, K.526, with him that September and, having made further visits to the studios in the meantime, first appeared with him in public at the Salle Pleyel, Paris, on 13th October 1934. For a time following her first marriage in 1938 she lived in Australia, but after the Second World War she settled in London, where she remarried. A woman of firm principles, she was known to open her house to vagrants and other down-and-outs. As a musician she was happiest in Mozart, although she covered a wide repertoire. Her recordings include Schubert's 'Trout' Quintet with members of the Amadeus Quartet, Mozart concertos with her brother conducting, trios with Yehudi and Maurice Gendron - their collaboration lasted 25 years - and sonatas with Yehudi, among which should be mentioned those by Bartók, Enescu and Franck. She died in London on New Year's Day 1981 after a long illness. Her brother wrote of her: 'Such was Hephzibah's sensitivity that she did not need many words. She was an extraordinary instrument, almost an extension of myself'.

Born in New York on 22nd April 1916, Yehudi Menuhin died in Berlin on 12th March 1999. Between those dates he metamorphosed from the child of obscure Russian immigrants into Baron Menuhin of Stoke d'Abernon, perhaps the best-known musician in the world and a sort of international statesman. He was brought up initially in San Francisco and, after two years of lessons with Siegmund Anker, began studies with Persinger in 1923. Two years later he gave his first full solo recital. Then, in 1926, came his New York début, his concerto début in San Francisco and his first trip to Europe, where he studied in Paris with Enescu apart from two summers in Basel with Adolf Busch. From 1931 the family, who lived off Yehudi's earnings, established their home near Paris, and the following year the boy recorded Elgar's Violin Concerto under the composer's direction. After his world tour in 1935 he took an eighteen-month sabbatical and then entered on a disastrous first marriage: his parents had not prepared him for real life. Many war-time concerts and a 1945 tour of the German death camps with Benjamin Britten were followed by a successful second marriage and a career lived in the limelight. In due course he took up conducting, making numerous recordings in that rôle, and although he never had much time available for teaching, he founded schools in England and Switzerland. The public, nevertheless, continued to associate him with the violin, even when he had given up playing it, and much of Menuhin's later life was spent trying to reconcile his increasing musical mastery with his diminishing control over his instrument.

A further reason why the Lekeu Sonata is one of the best Menuhin recordings of the 1930s is that it was done in London, where both the equipment and the engineers were superior to those in Paris. Although Menuhin re-recorded the work in 1955, he failed to improve on his effort with Hephzibah: not only was the pianist Marcel Gazelle less finely attuned to him than his sister, but the American-made tape recording was less kind to his tone than the 78rpm process of seventeen years earlier. Unfortunately this recording of the A major Sonata by Lekeu's teacher Franck was done in Paris and the difference in recording quality is palpable. Yehudi first learnt this masterpiece in 1927 at Enescu's little country house in Bellevue, near Meudon, and the Sonata 'became so imbued with the place that I only have to play it to see again the room on the upper floor, Enescu at the upright piano, and beyond the open window, the smiling French countryside'. Some of that feeling finds its way into the recording, which has many appealing moments, even if it cannot match the poise and structural strength of the performance that the Menuhins set down in 1959 (there is also a fine live one on film). The Beethoven Sonata here was the fruit of Yehudi's second visit to Australia, where Hephzibah was living on a sheep farm with her first husband Lindsay, brother of Yehudi's first wife Nola. The joy of that 1940 summer, enhanced by the birth in Melbourne of Yehudi and Nola Menuhin's second child Krov, can be heard in the relaxed performance that brother and sister gave in the Sydney studio (they recorded the Brahms G major Sonata on the same day). The Australian record industry had its strong points - pressings made at the Flatbush plant were much admired - although inevitably these Beethoven and Brahms recordings were less well engineered than they would have been in London. Britain, however, was at war; and in any case, it is pleasant to have such souvenirs of the sojourn Down Under.