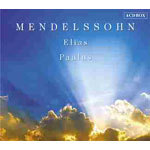 "Brilliant Classics have licensed these two recordings, neither of which is very old, from Hänssler Classics. Let's not beat about the bush. What we have here are two first rate performances, both of which are fit to be ranked among the prime list of recommendations for the respective works.

Paulus was Mendelssohn's first major choral and orchestral work. In 1829 he had conducted the first performance of the St. Matthew Passion since the death of Bach and the influences of the earlier master are plain to see. Much of the recitative is stylistically indebted to Bach and there is an even more pronounced influence shown in Mendelssohn's use of chorales.

The oratorio narrates several incidents from St. Paul's life, opening with the martyrdom of St. Stephen and then illustrating Paul's conversion on the road to Damascus followed by some incidents from his early career as a preacher. As in Elias the chorus acts as both a protagonist in the action and as a commentator upon the incidents.

Helmuth Rilling secures a fine, committed performance. His Stuttgart choir, here augmented by singers from Prague, give an excellent account of themselves. The soloists are all on excellent form and the Czech Philharmonic give lustrous support to the singers.

In the title role, Andreas Schmidt turns in a very fine performance, one in which frequently reminds us that he is a pupil of Dietrich Fischer-Dieskau, himself no mean exponent of this part. In the early part of the work, he is forceful and determined as a persecutor of the Christians, albeit one acting from principle (as portrayed by Mendelssohn). Later, in his big aria of conversion and repentance, 'Gott, sei mir gnädig' (CD 1, track 18) his singing is noble and elevated. I thought that in 'Ich danke dir, Herr, mein Gott' (track 20) he sounded a bit straight-faced; I would have welcomed more of a suggestion of joy and uplift. However, when he reproves the Jews in 'Ihr Männer, was macht ihr da?' (CD 2, track 14) he is quite splendid. Overall, his is a most convincing portrayal.

Michael Schade, with more to do than in the companion oratorio, is equally fine. He gives a moving portrayal of St. Stephen, and throughout the work he consistently delivers passages of recitative intelligently and with a fine sense of dramatic pace. His final aria, 'Sei getreu bis in den Tod' (CD 2, track 18) is absolutely outstanding. The voice is produced effortlessly with marvellous use of his head voice. His control of breath and of phrasing is superb and, for my money, this is the finest piece of singing in the entire performance (there's a fine cello solo also).

Juliane Banse also sings extremely well. Her arioso, 'Lasst uns singen' (CD 2, track 8) is gorgeously fluent and she imparts a suitable sense of pathos to 'Jerusalem! Die du tötest die Propheten' (CD 1, track 7). The contralto, Ingeborg Danz, has much less to do but she has a rich and disciplined voice which is heard to good effect in a controlled and eloquent ' Doch der Herr vergisst der Seinen nicht' (CD 1, track 13).

The chorus is consistently impressive. They are responsive and flexible and pay close attention to dynamics and rhythm. The internal balance within the choir is good (and is well caught by the recording). Praise too, to the engineers for not balancing the choir too far behind the orchestra, as is so often the case in recordings of oratorio. Try ' O welch eine Tiefe des Reichtums', the concluding chorus of Part One (CD 1, track 22) for an excellent example of the choir's work. Here, they are especially to be commended for maintaining excellent articulation without loss of tone when the tempo picks up (track 22, from 2'31"). Again, at the very start of Part Two they deliver the harmonically majestic opening very impressively (CD 2, track 1).

Helmuth Rilling directs the whole work very well indeed. He keeps tempi on the move, without ever sounding rushed and he has a keen sense for the dramatic passages. He gets committed and very supportive playing from the orchestra and he exhibits fine understanding of the needs of his soloists.

With the performance captured in excellent, clear sound, this is a thoroughly recommendable account of the work. In the last analysis, Paulus lacks the really distinctive choruses or memorable arias that are found in abundance in Elias but there is still a great deal of fine music in it. When it receives a performance of the stature of this one it makes a powerful effect.

By the time Mendelssohn came to write Elias he was able to draw not only on his experience of writing Paulus but also the Second Symphony, Lobegesang (1840), with its important vocal element. Elias became a "hit" almost overnight and has remained a staple of the oratorio repertoire ever since. This is reflected in the fact that there have been far more recordings of this work than of Paulus. Nonetheless, even in a much more competitive field Rilling is again a front-runner.

He has a very fine Elias in the shape of Wolfgang Schöne, who has a fine voice, which he uses with great intelligence; producing fine, even tone throughout the compass of the voice. A singer essaying this role is called upon to portray several different traits of character including the fiery prophet and the noble supplicant before God. Schöne portrays every facet of Elias' character most skilfully and sympathetically. So, we find him ringing and authoritative in 'Ist nicht des Herrn Wort wie ein Feuer?' (CD 1, track 19) whereas for 'Herr Gott Abrahams' (CD 1, track 16) he realises to perfection a mood of dignified supplication. Later, in the wonderful 'Es ist genug!' (CD 2, track 6), (in which, for good measure the cello solo is marvellously played) Schöne imparts weary resignation. He and Rilling handle splendidly the transition to the dramatic central section of this aria (from 2'03"), gradually ratcheting up both tempo and tension. Finally, he bids a noble farewell in 'Ja, es sollen wohl Berge weichen' (CD 2, track 17). His is an outstanding assumption of the role, certainly among the very finest I have heard.

The other soloists are also very good. Michael Schade has a lovely silvery ring to his voice. He has two marvellous arias to sing and does full justice to both. For my taste 'So ihr mich von ganzem Herzen suchet' is a little too slow (CD 1, track 6) and Schade and Rilling linger a bit too much over some of the expressive points but the singing itself is very fine. Schade also gives a fine reading of 'Dann werden die Gerechten leuchten' (CD 2, track 19) even though, for me, he does not surpass either John Mark Ainsley (for both Herreweghe and Paul Daniel) or Anthony Rolfe Johnson (for Marriner) in terms of easy, supple delivery.

Christine Schäfer is excellent as the Widow in Part One and also gives a memorable account of 'Höre, Israel' (CD 2, track 1). The contralto, Cornelia Kallisch was new to me. She has a lovely, full (but not fulsome) contralto She sings 'Weh ihnen' (CD 1, track 20) with dignity and lovely consolation. Later, she is an imperious and fiery Queen.

The contribution of the chorus is first class. There is, for example, plenty of punch in 'Aber der Herr sieht es nicht' (CD 1, track 7) but they are just as effective in quieter music. Consistently they observe Mendelssohn's dynamics and their tone is never forced. The orchestral playing too is very good indeed.

Helmuth Rilling clearly has the measure of the score and directs it with obvious attention to detail and affection. He has a strong sense of forward momentum and all the dramatic moments make their full effect.

The recorded sound is excellent, being clear, detailed and very musically balanced.

This version of Elias is an extremely fine one and a leading recommendation among versions in German.

It seems churlish to complain when these CDs are offered at bargain price but only the German text is provided and there are no notes whatsoever. This is a great pity for Paulus in particular may not be familiar to some listeners and those who do not speak German will find it hard to get their bearings. Since Brilliant Classics have shown with their cycle of Shostakovitch symphonies under Barshai that they can provide decent documentation even in this price bracket it is a shame that they could not do so for this issue.

However, I cannot let even this reservation get in the way of a most enthusiastic recommendation for this set. Prospective buyers who might be wary of an apparently cheap price can rest assured; there is nothing cheap about this issue except the absurdly low price. Both these performances would be fully competitive at premium price. As it is, at the outrageous price asked by Brilliant Classics this issue represents outstanding value for money, featuring as it does marvellous music in outstanding performances captured in first class sound.