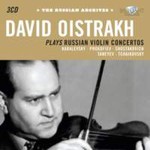 "..to compare and to contrast multiple recordings by this artist is an unmissable one, and rendered even more so by the budget price range. What are you waiting for?"
(MusicWeb)

David Oistrakh is regarded to this day as the greatest violinist to emerge from Russia in the 20th century. Born in Odessa in the Ukraine in 1908 to Jewish parents, his early years were spent in a musical household, before at the age of 5 he took lessons with Piotr Stolyarsky on both violin and viola. A fellow pupil at this time was the great Nathan Milstein. His first public concert was in 1914, and he entered the Odessa Conservatory in 1923. He performed the Glazunov concerto under the composer in 1927, and engagements with Nikolai Malko and the Leningrad Philharmonic followed. Friendships and music partnerships blossomed with Lev Oborin, Jacques Thibaud and Prokofiev.

His friendship with Shostakovich resulted in two superb concertos - the 2nd being a 60th birthday present for Oistrakh. After World War II, Oistrakh was allowed to travel extensively throughout the Soviet Bloc, and importantly to the West. Another great friendship from this period was that with Sviatoslav Richter, with whom he formed a duo. A performer of wide tastes and huge capabilities, his tone was sweet and even, and notable for its power. He was never flashy, and never coarse or self-indulgent. His repertoire ranged from Bach through the great classical and romantic concertos, to the 20th century masterworks by Sibelius, Hindemith and Shostakovich. These 3 CDs contain the music by composers he knew well and was friends with, plus the Taneyev Suite and Tchaikovsky Concerto - a particular favourite of Oistrakh. These recordings are a fitting memorial to a truly great artist.