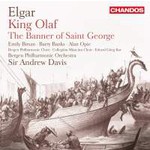 After having recorded Elgar's The Dream of Gerontius ('Recording of the Month' in BBC Music), Sir Andrew Davis now turns to two of the composer's most popular early choral works: Scenes from the Saga of King Olaf and The Banner of Saint George. The recording was made soon after a successful performance, featuring the same 'excellent Bergen Philharmonic' and 'outstanding' vocal forces: the 'imposing' baritone Alan Opie, the 'high, incisive tenor' Barry Banks, singing 'fearlessly in some quite challenging passages', and the American soprano Emily Birsan, who sang 'with radiant delicacy' (The Daily Telegraph).

Dating from his years of 'apprenticeship', the two works shaped Elgar's reputation as a leading orchestrator and most popular British composer of his time. The secular cantata Scenes from the Saga of King Olaf derives from Longfellow's epic poem about Olaf Tryggvason, who became King of Norway in 995. While the text was heavily adapted and augmented, the use of sophisticated compositional techniques, such as extensive motivic work, resulted in music of great power and solemnity.

The ballad The Banner of Saint George is based on the story of Saint George of Cappadocia, as related by the Bristol poet Shapcott Wensley. It was commissioned by Britain's leading publisher, Novello, and composed in only one month in 1896. Elgar overcame the prescriptive nature of the words and produced a work of lasting charm, the music rising above the material to create atmosphere, momentum, and colour.

"The Chandos SACD sound is full-blooded and excellent in every respect. I noticed with interest that for this project Ralph Couzens was assisted by Gunner Herleif Nilsen of the Norwegian Broadcasting Corporation; between them they've produced very fine results. The notes by Andrew Neill are comprehensive and full of interest." (MusicWeb Feb 2015)

"Elgar's cantatas (Olaf, Caractacus, Black Knight) will never be my first choice of music. Having heard the two works on this CD, I cannot fail to be impressed with Elgar's ability to write engaging music for these prosaic texts. Some of the passages in both works are sublime and constitute miniature masterpieces within the entire work. Listeners who like to hunt latent strengths in a composer's early works will have great scope for their activities in King Olaf in particular." (MusicWeb Feb 2015)

"The Bergen orchestra plays with a keen ear for colour and dramatic flux, and the chorus...makes the narrative live and breathe in suppleness, expressive sensitivity and lusty power...three fine soloists...carry the story with great distinction, subtlety and immediacy of impact." (Daily Telegraph)

"King Olaf is a folk-tale narrative about the Norwegian Olaf Tryggvason, in the tradition of Mahler's Das Klagende Lied or Schoenberg's Gurrelieder, and it is splendidly performed by Davis's Bergen forces. The soloists, Emily Birsan, Barry Banks and Alan Opie, all make positive contributions." (Sunday Times)

The Essential Delius (Incls 'Florida Suite', 'A Song before Sunrise' & 'the Walk to the Paradise Garden')