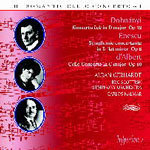 Hyperion is delighted to introduce the highly sought-after German cellist Alban Gerhardt to the label with these dazzling performances of three cello concertos written within the span of five years either side of the close of the nineteenth century. This disc is a fitting start to Hyperion's new series of Romantic Cello Concertos; a follow-up to the highly successful Romantic Piano Concerto series and Romantic Violin Concerto series.
The Slovak-born Dohnányi grew up with the sound of the cello in his ears - his father was an excellent amateur cellist - and his understanding of instrument shows in his Konzertstück Op 12; its lyricism and emotional urgency suggest an acquaintance with Mahler's music but there is also more than a hint of Brahms and a splashing of Hungarian folksong.

The Symphonie concertante, Op 8 is an astonishingly assured composition produced by the Romanian-born George Enescu in his late teens. The piece is an innovative and virtuosic masterpiece, with luminous orchestral textures. The talented composer was also a fine cellist.

D'Albert was born in Glasgow in 1864 into a prestigious family. His ancestors included the composer Domenico Alberti, after whom the Alberti bass takes its name, and his paternal grandfather was an adjutant to Napoleon I. He was taught composition by Arthur Sullivan and his pianistic skills were hailed by none other than Liszt when he went to study with the great master in Vienna. His cello concerto, written in 1899, is unusual in that it opens with the principal theme played by the oboe and then clarinet before finally passing to the soloist.

Interestingly all three composers use the single-movement structure subdivided into sections of differing tempi created by Liszt in his symphonic poems. As befits a solo instrument of such vocal quality, long lines of unfolding melody are common to all the works, and all are beautifully 'sung' by the soloist accompanied by stalwarts of the concerto repertoire, the BBCSSO, on top form as ever.

'Gerhardt's playing, with its richly hued tone, gets right to the heart of this music and brilliantly ignites the fireworks that the Enescu and d'Albert pieces have up their sleeves'
- The Daily Telegraph

"Heart-warming lyrical melodies, as well as characteristically resourceful orchestration, abound in the Dohnányi Konzertstück… Gerhardt's warmly recorded performance lays claim to being the most convincing of all… Eugen d'Albert also pursues the stylistic path of Brahms in his C major Cello Concerto. Once again, Gerhardt acquits himself admirably, making light work of the technical hurdles... Enescu's inexplicably neglected Symphonie Concertante is projected with the utmost conviction by Gerhardt and Kalmar and provides a fitting climax to a totally absorbing release." (BBC Music Five Stars)

Complete Works for Cello and Orchestra