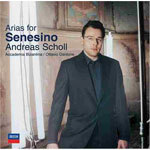 "An enterprising programme of music composed for the 18th century's star castrato. The castrato Senesino was one of the great singers of Handel's day, an artist of virtuoso technique. He was fêted by audiences throughout Europe and enjoyed particular renown in London where he lived for two periods. Such was Handel's admiration for him that he conceived 17 roles for him: Andreas Scholl is a worthy (and thankfully intact) modern-day successor." Editor's Choice Gramophone Magazine Awards 20005

Read more about the album here in our album micro-site.

One of the truly outstanding voices of today, star countertenor Andreas Scholl celebrates one of the 18th Century's greatest vocal superstars - the remarkable male alto known as Senesino.
Senesino's place in history was secured by his extraordinary association with Handel, who after travelling to Dresden to hear him, brought him to London to join his Italian Opera Company - where he was greatly celebrated by the public, and much admired by the ladies. Inspired by this unique singer, Handel wrote for him a dazzling succession of operatic roles which showcased the beauty and power of his extraordinary vocal personality.

Scholl's exquisite voice, beloved of critics and audiences, pure, penetrating, virtuosic and deeply characterful, is a remarkable match for the voice of Senesino. This is a project very close to his heart and the album will be released to coincide with a Europe-wide concert tour of this repertoire.

The impact of Senesino's extraordinary talents on Handel, and therefore on the history of opera, was profound - with many great roles being written for him including the title role of Giulio Cesare, which Andreas Scholl again sings on stage this Spring (in Copenhagen). Scholl has also sung another complete Senesino role on stage, when he made his Glyndebourne Festival debut as Bertarido in Rodelinda.

In a series of virtuosic showpiece arias Scholl celebrates Senesino from the very start of his career to the very last aria he is known to have sung - and Handel is not the only composer featured, as the album will also include premiere recordings of arias by other Baroque greats including Albinoni, Scarlatti, Lotti and Porpora.

Andreas Scholl is again joined by the Accademia Bizantina under the direction of Ottavio Dantone who together provided exquisitely sensitive accompaniment on their first collaboration - Arcadian Cantatas.