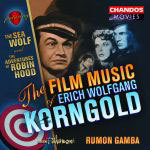 "All credit to Chandos: a superb disc. It valuably fills a yawning gap in the discography and opens the door on one of the most subtle and grown-up of film scores."
(MusicWeb Oct 2005)

This is the premiere recording of the complete score of Korngold's Sea Wolf - one of his finest scores, full of drama and imagination. Korngold was one of Hollywood's most famous film music composers, whose highly romantic, brilliantly orchestrated scores have ensured their survival away from the screen.

Chandos' Film Music series has received unanimous critical acclaim, both for the excellence of the sound and for the performances.

Korngold made a seamless move from the world of classical music to that of Hollywood. His wonderful command of the orchestra and sweeping romantic sounds have influenced many later composers such as John Williams.

The Sea Wolf by Jack London is one of the most filmed stories in movie history. Erich Wolfgang Korngold's score for the 1941 version - stark and brutally dissonant - shows him at his most dramatic, and comes closest to the style and mood of his extraordinary mystical operas Die tote Stadt and Das Wunder der Heliane.

The plot concerns Van Weyden, a writer, and two fugitives who have been given refuge aboard the mysterious sealer 'Ghost', captained by the cruel Wolf Larsen. The crew eventually mutinies against Larsen's many crimes, but though Van Weyden and the fugitives try to escape Larsen's clutches, they find themselves drawn inexorably back to him. Korngold began to compose his score when filming was complete, adopting his usual, unique method. Having already composed his main thematic material, based on observations made during shooting, he sat at the piano in the projection room and improvised to the running film until his music fitted it like a hand in a glove. Later, at home, he wrote the sequences from memory, marking each reel in time, elapsed by the second. As with most of Korngold's film scores, the music is a continuous composition

and flows from cue to cue, more like a symphonic poem. Warners re-released The Sea Wolf in 1947 and trimmed its length by twelve minutes, unfortunately discarding the excised footage; this shortened version has been the only one available. For this recording, however, the missing musical sequences have been restored so that we can hear Korngold's complete score for the first time since 1941.

Perhaps Korngold's most famous film score was for the 1938 technicolor classic The Adventures of Robin Hood starring Errol Flynn. It won Korngold his second Oscar for Best Score, and soon after its release he assembled a short concert suite in four movements (with slightly reduced orchestration), one of the first pieces of film music to be played in concert. It is now regarded as one of the most influential scores ever written for the cinema.