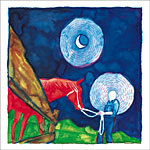 This is a collaboration between Sam Beam [Iron and Wine] and the full Calexico band. The resulting 7-track mini-album is a truly harmonious affair, sure to please fans of both bands. Mojo said "Beautifully recorded, this is intimate seduction for voice, elegant finger-picked guitar..."

"Beautifully recorded, this is intimate seduction for voice, elegant finger-picked guitar and not much else."
- Mojo

'In The Reins' is a collaboration between Sam Beam [Iron and Wine] and the full Calexico band. The idea of working together had been tossed around for more than 3 years, though schedules simply didn't allow. After convening in Calexico's studio in Tucson, Arizona, the band began to flesh out the songs written by Iron and Wine and the resulting 7-track mini-album 'In The Reins' is a truly harmonious affair, sure to please fans of both bands.

Iron and Wine are one of SubPop's modern success stories with their affecting alt folk pop, while Calexico have been plowing a singular furrow of Mex-influenced alt folk for many years now. This is a match made in indie heaven!

'In The Reins' also features the talents of Natalie Wyants on vocals and Salvador Duran, a local fixture of the Tucson Flamenco scene on vocals and Botas, as well as regular Calexico guests Nick Luca and Craig Schumacher.

'In The Reins' stands tall over the shadow already cast by both Iron and Wine and Calexico, and showcases just a few of the myriad of possibilities which lie ahead for both. A beautifully joyous album which we consider essential listening!

The Creek Drank the Cradle