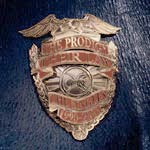 Featuring a 16 track bonus disc that includes some rare b-sides, exclusive live recordings and the brand new re-mixes of "Voodoo People" by Pendulum and "Out Of Space" by the Audio Bullys - while stocks last!!

While stocks last, 'Their Law: The Singles 1990 - 2005' is available as this limited edition set with a 16 track bonus disc that includes some rare b-sides, exclusive live recordings and the brand new re-mixes of "Voodoo People" by Pendulum and "Out Of Space" by the Audio Bullys.

Since their formation in 1990 The Prodigy have released four albums and numerous singles, they've been number 1 in 27 countries simultaneously with their incomparable 'Fat Of The Land' masterpiece, toured the world with their incendiary live show, made groundbreaking videos, shaken things up musically and socially and been unafraid to court controversy.

They've always done it in their own formidable way - as highlighted on 'Their Law', this definitive collection of their finest tracks. Featuring 15 hit singles; 'Their Law' showcases the career to date of The Prodigy, via the tracks that changed the face of British music.

This collection features groundbreaking club classics like "Charly" and "Everybody In The Place" from their debut album 'Experience' and stand out favourites "Poison" and "No Good (Start The Dance)" from their sophomore release 'Music For The Jilted Genreation' through to the #1 singles "Firestarter" and "Breathe" from the landmark album 'Fat Of The Land' and recent hits "Spitfire" and "Girls" from their latest release 'Always Outnumbered Never Outgunned'.