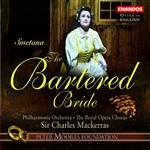 "A crisp, witty translation gives added sparkle to a terrific performance. Smetana's Bartered Bride used to be a popular repertoire work in the UK but lately has fallen from favour. This splendid recording - part of Sir Peter Moores's Opera in English series - conducted with passion and idiomatic authority by Mackerras, and cast with skill - should do much to restore the work's reputation. A delightful undertaking."
- Editor's Choice Gramophoen Magazine November 2005

Following the internationally applauded recording of The Magic Flute, which was an 'Editor's Choice' in Gramophone, Sir Charles Mackerras returns to conduct Smetana's The Bartered Bride. This is Mackerras's eighth recording on the Opera in English label, and marks the 10th anniversary of the collaboration between Chandos and the Peter Moores Foundation.

This is the only complete recording of the work available in English on CD.

Composing The Bartered Bride was quite a struggle for Smetana, and his second opera was received at its premiere with frigid indifference. It took seven years, four rewrites and a significant political change in Central Europe before it achieved the popular acclaim which ensured its survival in the repertoire. Smetana's revisions were comprehensive. In the original, the dramatic action was entirely carried forward by speech - as it is in The Magic Flute or Cornelius's The Barber of Baghdad. By giving the recitatives an orchestral accompaniment, Smetana shifted the piece firmly away from the territory of operetta or opéra comique, converting what is in some respects a formulaic comedy into a score that hints at darker emotions underneath. The original work was cast in two acts and made a rather lightweight evening's entertainment. In restructuring it, Smetana split the opera into three, with an opening scene in Act II which is a virtual miniature folk festival. Even the original opera was permeated with folk melodies and rhythms, but by building an entire scene from traditional dances, Smetana fashioned a form of vernacular musical theatre which spawned imitations for the next half century. And his transformation of the overture's development section into the complex comic finale to Act II is as inventive as anything by Rossini.

In today's Prague, it is still heresy to suggest that Dvorák was the more profound creator of romantic opera and Janácek the more penetrating and heart-rending musical dramatist. Where Smetana excels is in reflective lyrical writing. The extended ensemble at the centre of Act III does nothing to forward the drama, but searches into the souls of the principal characters and more than compensates for the opera's lack of dramatic development. We do not go to Smetana for psychology or spiritual depth, but there is no need for special pleading when the drama is dressed in such inebriating rhythms and such melodic grace. It is these qualities which ensure that The Bartered Bride is the one opera by Smetana which will always find a place in any theatre and in any language.

The Pearl Fishers (Highlights in English)