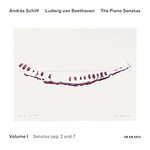 "Early Beethoven is maybe the toughest Beethoven to pull off: His ideas aren't always as compelling as those in his later music, and he has trouble saying what he means. You'd never think so, however, from András Schiff's superb first instalment of the Beethoven piano sonatas. The performances have the grace he brings to Mozart and the economy of expression he brings to Bach, plus his usual radiant tone."
- David Patrick Stearns, Philadelphia Sunday Inquirer

András Schiff, the distinguished interpreter of Bach,
Mozart and Schubert, has taken his time with Beethoven. Until he was 50, the 32 sonatas marked an obvious gap in his repertoire. The Hungarian pianist has been fully aware of the extreme demands of this important cycle in the literature for piano. On the one hand there is the overwhelming tradition of the legendary performers of the past - Schnabel, Fischer, Kempff, Arrau - on the other hand the complexity of the actual compositions: The sonatas, written between 1795 and 1822, are Beethoven's very laboratory. No single opus resembles another; each of them arrives at completely new solutions - in extreme concentration and density. The cycle, which Hans von Bülow once called the pianist's "New Testament", forms the central compendium of Beethoven's creative work. No other group of pieces allows for a comparably comprehensive overview of his stylistic development.

"For the pianist, it is much more difficult to approach Beethoven than it is with Bach, Mozart and Schubert: You are an interpreter of Bach or Mozart by birth as it were; Beethoven though has to be learned. These 32 sonatas to me always seemed like a suit I still had to grow into."
Thus Schiff recently accounted in the Berlin daily Der Tagesspiegel for his long lasting hesitancy. Today the suit fits: The first four recitals of Schiff's cycle in chronological order, launched in 2004 in major halls in Europe and North-America, were received by the press with unanimous enthusiasm. London's Evening Standard spoke of "sustained magic", while the Neue Zürcher Zeitung greeted a "very contemporary" rendering: "Very close to the musical structure, and miles away from the excitement of romanticism." Critics were particularly taken with Schiff's interpretations of allegedly well-known movements like the introductory Adagio from the "Moonlight" Sonata, both unconventional and absolutely true to the score.

ECM now presents Schiff's long awaited first cycle of the complete 32 sonatas. The pianist opted for live-recordings. The concert situation not only facilitates communicative immediacy, but also creates musical suspense. András Schiff uses two different grand pianos: a Bösendorfer, which, as he says himself, "is adequate to the Vienna dialect", which he likes in the early Beethoven, and a Steinway maintained by the internationally renowned piano technicians Fabbrini from Italy. Schiff rates the Steinway as the more objective and powerful instrument he prefers in the more dramatic sonatas. His approach to Beethoven is characterised by utmost conscientiousness: The pianist, who will be touring this fall (with a programme including the Sonatas op. 31 and the "Waldstein" Sonata), not only scrutinizes the composer's manuscripts kept in various libraries and institutes, but also studies the sound and playing techniques of the pianos Beethoven had at his disposal.

The recordings are made at Schiff's recitals in the Zürich Tonhalle, a concert venue which is famous for its outstanding acoustics. Starting in October 2005, the complete cycle will be released on ECM New Series in eight volumes. The Sonatas will be issued in chronological order as single or double albums respectively.

Ludwig van Beethoven's first Piano Sonatas op. 2 Nos. 1 to 3, written in 1795 when the composer was 25 years old, mark a debut of stunning confidence. Basically holding on to the tradition of their dedicatee Joseph Haydn who had been Beethoven's teacher in composition during his first time in Vienna, the op. 2 sets new standards right away. The four-movement layout is introduced as new model, with the third movement already developing into the typical Beethoven Scherzo.

Beethoven's technique of working with small and seemingly inconspicuous motifs is evident right from the start. Unlike Mozart and Haydn the young composer searches for expressive extremes: The finale of the first sonata is marked "prestissimo". Each of the sonatas exhibits a distinctive individual character; each explores a different aspect of piano writing.
The first one in f minor, not much longer than a quarter of an hour, demonstrates utter concentration, its initial movement being a prime example of sonata form. The second in A major is lyric, playful and full of humour, while the final C major piece displays elegant and daring virtuosity that brings the sonata close to concerto writing.

The fourth sonata op. 7 in E-flat major, composed 1796/97 is his second longest, surpassed only by the monumental "Hammerklavier" Sonata op. 106. Dedicated to his young pupil, Countess Babette von Keglevics, the piece was first published under the title "Grande Sonate". Rightly so: Its dimensions and impassioned gesture demonstrate a symphonic ambition.

Whether in the role of recitalist, concerto soloist, chamber musician or accompanist, András Schiff is recognised as one of the leading pianists of his generation. Known especially for his exploration of the Austro-German masters - Bach, Mozart, Schubert, Haydn, Schumann, Mendelssohn and Beethoven (whose sonatas dominate his schedule from 2004 to 2007) - his repertoire also embraces Chopin, Scarlatti, Smetana, Dvorák, Janácek and fellow-Hungarians Bartók and Kurtág.

András Schiff was born in Budapest in 1953 and studied at the city's Ferenc Liszt Academy with Pal Kadosa, György Kurtág and Ferenc Rados.