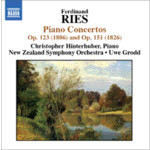 "If its successors are as good as this, the series will introduce us to a lot of very attractive music."
(MusicWeb Jan 2006)

BARGAIN OF THE MONTH (MusicWeb Jan 2006)

"Soloist, orchestra, conductor and recording quality are all beyond reproach. The young Austrian, Christopher Hinterhuber, displays a mature understanding of the traditions out of which Ries's music grows and is quite unphased by the more bravura passages. He finds wholly sympathetic partners in The New Zealand Symphony Orchestra and Uwe Grodd. This CD, I am pleased to report, is announced as the first volume in a projected series of the composer's complete works for piano and orchestra. If its successors are as good as this, the series will introduce us to a lot of very attractive music."
(MusicWeb Jan 2006)

"Editor/annotator Allan Badley speculates in the notes to this release that the reason for Ferdinand Ries's relative obscurity "may lie in his publication of an important book of reminiscences about Beethoven which has proved to be of such compelling interest to scholars that they have concentrated on it rather than his music." Judging from the pair of concertos presented here, that is indeed a bloody shame.
These two works, opus numbers notwithstanding, date 20 years apart in the composer's career: the C-Major from 1806, just after the conclusion of Ries's piano study with Beethoven (for composition, he had turned to Beethoven's teacher Albrechtsberger); the AI from 1826, shortly after his return to his native Rhineland after an extended, and considerably successful, sojourn in England. The former, not surprisingly, reflects a considerable debt to Beethoven-its opening theme, indeed, bearing a marked resemblance to its counterpart in Beethoven's Triple Concerto. The latter foreshadows Chopin in the cast of the piano-writing, though arguably surpassing him in the confidence of its harmonic organization. The theorist in me wants to pen an extended essay in defense of the proposition that the neglect of Ries's music is indeed as undeserved as Badley suggests. Fanfare is not a theory journal, so a few examples must suffice.
One inescapable compositional problem, of course, is how and when to manage the piano's first entrance; and without giving away the secrets, I'll report that Ries's solutions in both works are notably unpredictable and effective. The transitions from slow movement to finale also recall Beethoven's "Emperor" in their originality. Nor is melodic invention at all wanting here; the jaunty theme of the AI's closing rondo will stick in your brain as tenaciously as any advertising jingle.
There are no competing recordings of either of these pieces; so it's gratifying to report that, as best I can judge, the performers do the music full justice here. Badley's program notes are lengthy but engaging; sound quality just fine. If, then, you wish Beethoven had written more than five piano concertos, or Chopin more than two, this is music you'll want to know. More good news: there are another six Ries piano concertos where these came from, and the present release is the opening installment in a projected complete series. Plan now to buy them all; and be thankful that, with Naxos's budget pricing, you won't have to skip any restaurant dinners to afford them." James Carson FANFARE

As one of the greatest pianists in Europe of his time and a composer of exceptional ability it is surprising that the name Ferdinand Ries is not better known today. Indeed, the neglect of most of his major works is even more inexplicable given his long association with Beethoven. In most other circumstances this would have prompted an exhaustive study of his music but in Ries's case this has not happened. One of the reasons for this may lie in his publication of an important book of reminiscences about Beethoven which has proved to be of such compelling interest to scholars that they have concentrated on it rather than his music. Of his own career comparatively little has been written. Over the years there have been sporadic performances and recordings of some of Ries's chamber works and, more recently, of his very impressive symphonies. The concertos, however, have until now remained curiously unexplored. This recording is the first in a projected series of Ries's complete works for piano and orchestra.

Ries's connections with Beethoven began in Bonn where his father Franz, a professional violinist and pianist, taught Beethoven. Ries, too, studied with his father and also received cello lessons from Bernhard Romberg for whom Beethoven later wrote his Op. 5 Cello Sonatas. When the electoral court was dissolved in 1794 Ries found himself without the prospect of a secure position and for the next seven years remained at home studying with his father. In 1801 he moved to Munich where he eked out a fairly precarious existence as a copyist while taking lessons with Peter von Winter. In October he left for Vienna where Beethoven, now well-established as a pianist and composer, agreed to take him on as a pupil.

During Ries's three years of study with Beethoven he acted frequently as his secretary and copyist which, of course, lent great credibility to his later writings. Beethoven did not teach Ries composition - for that he went to Albrechtsberger, Kapellmeister at St Stephen's Cathedral - but his influence on Ries's development as a composer nonetheless was profound. Beethoven also smoothed his introduction into Viennese musical circles first by securing for him a position as pianist to Count Browne in Baden, one of Beethoven's own patrons, and in organizing his début (as Beethoven's pupil) on 1st August 1804 at which he gave a performance of the C minor Piano Concerto, Op. 37, with cadenzas of his own composition. With the risk of conscription into the French Army looming, Ries returned to Bonn via Prague, Dresden and Leipzig and later travelled on to Paris having being turned down as unfit for military service. He languished in Paris for two years before returning to Vienna in August 1808 where he stayed for just under a year.