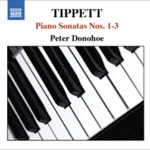 "For those fans of Tippett who are unfamiliar with his sonatas, this disc fits in perfectly with Naxos's wonderful record of presenting rarely heard works that are sensitively recorded and ably played. Donohoe's performances have conviction and strength."
(MusicWeb Feb 2006)

Among the most arresting features discernible in the output of Sir Michael Tippett is that the majority of his most important works fall into recognisably classical categories (operas, symphonies, concertos, string quartets and piano sonatas) that occur throughout his composing career. So with the four piano sonatas, which encompass a time-frame of 48 years and take in his range of creative preoccupations, from the vigorous neoclassicism of the 1930s, through the experimental phase of the 1960s, to a renewed involvement with the 'classical tradition' of the 1970s and the process of summation and synthesis that took place during the 1980s. Of equal note is the fact that, in common with his string quartets, no two of Tippett's sonatas have the same number and arrangement of movements, typical of a composer who sought new solutions to the challenges posed by large-scale instrumental writing over the previous two centuries.

By his own admission Tippett was a slow developer. Whereas his younger contemporary Benjamin Britten had established a fair reputation by his mid-twenties, Tippett evolved slowly and fitfully as a composer, withdrawing all of his music written before the First String Quartet, completed in 1935, though substantially revised in 1943. Compared to the Beethovenian density of this piece, the First Piano Sonata (1936-7) is both more relaxed in manner and more varied in expressive content. At its première, given by Phyllis Sellick in London in November 1937, it had the title Fantasy Sonata, indicating the musical range found within its clear-cut, four-movement form.

The first movement begins with a theme, alternately vigorous and flowing, which is made the basis of five variations. The first is lively and capricious, the second hectically virtuosic, while the third brings forth a lyrical new counter-melody. The fourth variation trips along in blithe syncopation, then the gamelan-like fifth emerges mysteriously from the depths, before a coda repeats the theme largely as before. The second movement takes the Scottish folk-song 'Ca' the cowes tae the knowes' as the basis for its increasingly elaborate and cumulatively expressive variants, before a return to its pensive origins. The third movement is cast in sonata form, its forceful and ruminative main themes made the subject of intensive discussion, before moving into a subtly altered recapitulation. In evoking jazz and popular music, the rondo fourth movement ranks among Tippett's most engaging pieces, concluding the work in a mood of boisterous humour, and, in its rhythmic freedom, anticipating the Concerto for Double String Orchestra (1939) and Second String Quartet (1942), as well as two post-war instrumental works, the First Symphony (1945) and the Third String Quartet (1946).

One of the greatest surprises for those who had kept abreast of Tippett's creative evolution was his seeming abandonment of the 'ecstatic lyricism' that permeated his music during much of the 1950s, notably his first opera The Midsummer Marriage (1952), the Fantasia Concertante on a Theme of Corelli (1953), and the Piano Concerto (1955), for an idiom harmonically more austere and formally more fragmentary. Hence the uncertainty which greeted his second opera King Priam at its 1962 première, to which the Second Piano Sonata, itself composed in 1962 and first performed by Margaret Kitchin that September, might be viewed as a formal and expressive pendant. The piece derives its tightly knit, one-movement form from the fantasy procedures beloved of English composers from Byrd to Purcell, while its mosaic-like construction evokes Stravinsky, whose influence on Tippett had been evident since the Second Symphony (1957), and who had long eschewed linear development for the succession of contrasted musical types.