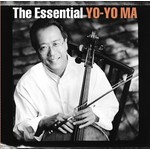 "Discs with snippets like this have to be taken for what they are: appetizers for further exploration or just agreeable easy listening. What is never in doubt is the high quality of the playing and recording. The insert booklet has full documentation and also a selected discography." (MusicWeb Jan 2006)

Yo-Yo Ma gave his first public recital at age 5 and by the time he was 19 was being compared with such masters as Rostropovich and Casals. One of the most sought-after cellists of our time, Mr. Ma has appeared with eminent conductors and orchestras in all the music capitals of the world. He has also earned a distinguished international reputation as an ambassador for classical music and its vital role in society.

Highly acclaimed for his ensemble playing, Mr. Ma regularly performs chamber music with a wide circle of colleagues. Over the past several seasons, he as joined Emanuel Ax, Isaac Stern and Jaime Laredo for performances and recordings of the piano quartet repertoire, including works of Brahms, Faure, Schumann and Beethoven, which have been released by Sony Classical. Mr. Ma's long-standing partnership with Emanuel Ax is one of the music world's most successful collaborations. Together they regularly perform duo recitals and have produced many recordings, including the complete cello sonatas of Beethoven and Brahms as well as works of Britten, Rachmaninoff, Prokofiev and Strauss. among others. During the 1995-96 season, they are celebrating the 20th anniversary of their partnership with a recital tour as well as a special concert at Alice Tully Hall for PBS's "Live from Lincoln Center" entitled "An Evening of Hausmusik," including Schubert's "Trout" Quintet.

Mr. Ma is currently working on a collaborative project of a different kind, creating films of Bach's Six Cello Suites that explore the relationship between Bach's music and other artistic disciplines. The first of these, featuring original choreography of Mark Morris set to the third Cello Suite, was premiered at the Edinburgh Festival in August 1995. Subsequent films will incorporate the work of the renowned Kabuki artist Tamasaburo Bando, the Italian architect Piranesi, Boston-based garden designer Julie Messervy and Olympic ice dancing champions Jane Torvill and Christopher Dean.

An exclusive Sony Classical recording artist, Yo-Yo Ma is a nine-time Grammy award winner. Among his recent releases are "The New York Album," featuring three works with orchestra - Stephen Albert's recent Concerto, Bartók's Viola Concerto and Bloch's "Schelomo" - with the Baltimore Symphony led by David Zinman; a recording of Chopin Cello Sonata and Piano Trio with Mr. Ax and Ms. Frank; and clarinet trios of Beethoven, Brahms and Mozart with Mr. Ax and Richard Stoltzman. Scheduled for releases this season are his new recording of the Dvorák Concerto, paired with Victor Herbert's Second Cello Concerto, with Kurt Masur and the New York Philharmonic, and several discs of chamber music, including the Mozart Piano Quartets, Peter Lieberson's "King Gesar" and Schubert's "Trout" Quintet. Another recording project takes him to Nashville for an album of original music with Country fiddle player Mark O'Connor and bassist Edgar Meyer.

Contemporary music, particularly by American composers, has for many years been an important part of Mr. Ma's repertoire. Over the past several seasons, he as premiered works by Stephen Albert, William Bolcom, John Corigliano, Richard Danielpour, David Diamond, John Harbison, Leon Kirchner, Ezra Laderman, Peter Lieberson, Tod Machover, Christopher Rouse, Bright Sheng and John Williams. During the 1995-96 season, he records three of these pieces, the recent concertos of Kirchner, Rouse and Danielpour, with David Zinman and the Philadelphia Orchestra. He has also recorded a new work by Andre Previn, set to words by Toni Morrison, with soprano Sylvia McNair and Mr. Previn as pianist.

Additional highlights of Yo-Yo Ma's schedule for 1995-96 include a concert with the London Philharmonic under Bernard Haitink, recreating the premiere of the Dvorák Concerto the day of the work's 100th anniversary (March 19, 1996); tours of South American and of East Asia; engagements with the orchestras of Cleveland, Montreal, Philadelphia, Pittsburgh, San Francisco, St. Louis and Toronto as well as the Concertgebouw, La Scala and Tonhalle orchestras; and a recital tour with pianist Jeffrey Kahane.

Alongside his extensive performing and recording, Yo-Yo Ma devotes time to work with young musicians in programs such as those at Interlochen and Tanglewood. He seeks to include educational outreach activities in his regular touring schedule as well, through master classes and more informal interaction with student audiences. He is also working to develop concerts for family audiences and will appear with Emmanuel Ax on Carnegie Hall's family series in 1995-96.

Born in Paris in 1955 of Chinese parents, Yo-Yo Ma began his cello studies with his father at age 4. Later he studied with Janos Scholz and in 1962 he began his studies with Leonard Rose at The Juilliard School. A graduate of Harvard University, he was accorded by his alma mater the special distinction of an honorary doctorate in music in 1991. He was also the recipient of the prestigious Avery Fisher Prize in 1978. Mr. Ma and his wife Jill have two children, Nicholas and Emily.

He currently plays a Montagnana cello from Venice made in 1733 and a Davidoff Stradivarius made in 1712.