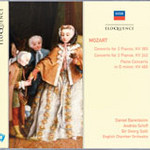 This reissue offers one major work, the Piano Concerto in D Minor, coupled with recordings of pieces that I would guess musicians like to play for the sheer, uncomplicated fun of it: the concertos for two and three pianos. (All the concertos here were recorded in 1989.) The three-piano work was written for an aristocratic patron, Countess Maria Antonia Lodron, to play with her two daughters. The problem was that daughter number two was evidently not a good pianist, so Mozart wrote a particularly simple part for Giuseppa (played here by Georg Solti). The two-piano concerto was written so that Mozart himself would have a piece to play with talented Viennese students. It's a more sparkling work, but neither piece, however good-natured the composer's intentions, ranks that high in Mozart's œuvre. That said, they both are treated respectfully and played well by Georg Solti and his two auxiliary pianists, who make the Adagio of the Three-Piano Concerto more touching than I've heard it before.

It's charming to hear the measures of that concerto that Mozart wrote for his least-talented patron, but it also reminds me that some of Mozart's greatest moments, even in the Piano Concerto in D Minor, come in passages a pianist could play with two fingers, such as the four quarter notes in measure 49 of the Rondo of this piece, which Rubinstein plays as written to incomparable effect and which Solti decorates. I have always thought that the sublime simplicity of those notes was the point: Solti sees them as a sketch. Still, his is a wonderful recording by a man who is obviously an important conductor and a fine pianist. This is not my favorite recording: there are others starting with Schnabel and Rubinstein. Yet orchestra and pianist play beautifully together, Solti with energy and drive.

'The finale, a kind of rondo-minuet, is delightful, with energetic keyboard work that nevertheless dances' [Concerto for 3 Pianos] Gramophone

Mahler: Symphony No 8 'Symphony of a Thousand'
more suggestions…