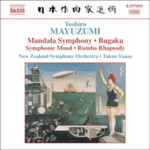 "A varied and striking conspectus of Mayuzumi's music. Once sampled I suspect most people will want to try some of his other scores as well."
(MusicWeb Jan 2006)

"These works by Mayuzumi undoubtedly belong to his most accessible pieces, and none of them may be considered an earth-shaking masterpiece; but they all make for a very enjoyable disc. Excellent performances from New Zealand and very fine recording throughout. With this release, Naxos's Japanese series moves closer in time."
(MusicWeb April 2006)

Toshiro Mayuzumi is one of the most important Japanese composers, enjoying an international reputation in the period after World War II. He was born in 1929 in Yokohama, a city that had developed after Japanese isolationism came to an end and therefore relatively free from Japanese traditions and conventions. Mayuzumi's father was a sea-captain, and Mayuzumi, was brought up in this unique environment, which nurtured his yearning for the exotic, including Asia, America and Europe. His father's occupation had another influence over the future composer in view of his absence from home during the first eight years of the composer's life, an absence for which he later found compensation in the strength later apparent in his music. His family was not especially musical, but as was common with many rich families of the day, the family had a reed organ. Mayuzumi started to take piano lessons in his primary school days and composed dozens of songs and piano pieces, consulting books on music theory.

In 1941, Mayuzumi entered Yokohama Dai-ichi Junior High School. In war-time, Japanese schools and companies organized students and workers into choral groups, wind bands, school bands and harmonica bands, to enhance solidarity and to entertain people. Mayuzumi belonged to the harmonica band and the choral society at school, in addition to playing the double bass in an amateur orchestra. Progressing in his piano playing and aspiring to be a professional composer, he began to study music theory under a composer living in Yokohama, Taro Nakamura, whose style was neoclassical, a pupil of Kan'ichi Shimofusa who had studied with Hindemith in Berlin.

In the spring of 1945 Mayuzumi entered the composition department of Tokyo Music School (Tokyo University of Fine Arts and Music), known as the best music institute in Japan. There his classmates included Akio Yashiro, his life-long friend. They began to study with Qunihico Hashimoto, chief professor of the department, but his studies at school were often interrupted by war-time conditions and frequent airraids. Hashimoto, therefore, decided to take him into his home and continue to give him lessons. At the time Hashimoto was one of the central figures in Japanese music, providing patriotic music, while privately experimenting with unpublishable dodecaphonic music. Mayuzumi learned four things from Hashimoto, the music of Debussy, Ravel and Stravinsky, a certain versatility creating an extensive range of music from progressive pieces to pop music, how to dress and behave fashionably, and a patriotic attitude.

Musical fashions changed in Japan during the war, when Chinese and Indonesian pop-tunes replaced the banned American jazz. Latin-American music escaped prohibition, with the result that the tango and the rumba were allowed, and the blues was barred. Mayuzumi's yearning for exoticism was fulfilled by Asian and Latin- American music. After the war there were considerable changes in the Tokyo Music School. Hashimoto, a pupil of Egon Wellesz in Vienna and an associate of Schoenberg and Krenek, was forced to resign. Mayuzumi and his friend Yashiro now began to study with two new teachers, Tomojiro Ikenouchi, a pupil of Henri Busser and Paul Fauchet at the Paris Conservatoire, and Akira Ifukube, who was discovered by Alexander Tcherepnin. Ikenouchi, an admirer of Ravel and under the influence of French academism, was then one of the finest composers and educators in Japan. From him Mayuzumi learned techniques of harmony and polyphony, based on the Conservatoire tradition. Mayuzumi's interest in Debussy and Ravel, acquired first under Hashimoto, was deepened under Ikenouchi. Ifukube, on the other hand, worshipped Stravinsky's Le sacre du printemps and was attached to ostinato and earthly, violent music only possible with a big orchestra. He was also proficient in physics and acoustics and was an expert theorist in orchestration. Mayuzumi's earlier interest in Stravinsky was developed under Ifukube.