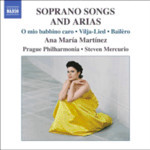 "One of the freshest, loveliest and most musical soprano voices to have appeared for some time"
(MusicWeb Jan 2006)

"Every diva dreams of leaving her audience wanting more. After this disc I certainly do, and Naxos should provide it with some urgency"
(MusicWeb Feb 2006)

"A joyful recital from a rising singer in the opera world. This Puerto Rican soprano has been steadily making a name for herself and this debut recital (which for some reason has gone unreleased since 2000), confirms the emergence of an exciting artist. Her voice isn't easy to categorise, with dusky mezzo hues across the range. Nor does it have the floated high notes for Verdi or Puccini. But it is wonderfully supple and thrilling."
Editor's Choice Gramophone Magazine March 2006

"Her new CD of soprano chestnuts, recorded in 2000, showcases her feisty personality and beguiling timbre - dark but with a pearly sheen and gleaming top notes, sometimes reminiscent of Angela Gheorghiu.

Martinez is at her best in contrasting selections: "Baïlèro” from Canteloube's Change d'Auvergne, all languor and come-hither dreaminess; and "De España vengo” from Pablo Luna's zarzuela El niño judio, whose roulades sparkle and whose soulful central section is breathtakingly seductive. Arias from La rondine, Madama Butterfly and Gianni Schicchi show an artist remarkably attuned to Puccini's voluptuous, melancholy muse. Steven Mercurio and the Prague Philharmonia spin a glamorous halo around the up-and-coming diva."

The present set of soprano arias opens with the popular setting of Alfred de Musset's evocation of Spain by Léo Delibes. The French composer is particularly known for his ballet Coppélia, based on a story by E.T.A. Hoffmann, first staged in Paris in 1870. His Flower Duet from his opera Lakmé has, for various reasons, won contemporary popularity. In common with other French composers of his generation, Delibes explored the exotic, in Lakmé an Indian setting. His setting of de Musset's poem, Les filles de Cadix, with its celebration of the bolero, conjures up the spirit of Spain.

Shakespeare may have at first seemed primitive and uncouth in a French theatrical tradition that had drawn heavily on the principles of Aristotelian classicism. By the nineteenth century, however, tastes were changing, thanks to the advocacy of writers like Victor Hugo. Gounod's version of Romeo and Juliet, first staged in Paris in 1867, uses a libretto inevitably reduced from the original play. The opera opens with old Capulet, Juliet's father, welcoming guests to his house to a masqued ball into which Romeo and his friends will intrude. Juliet, intended as the bride of Count Paris, in her waltz-song Je veux vivre confides in her nurse her feelings, soon to be turned towards Romeo.

The short opera Gianni Schicchi forms part of a trilogy by Giacomo Puccini, first seen in New York in 1918. Based on an episode in Dante's Inferno, the plot, like that of Ben Jonson's Volpone, revolves round a deception in which Gianni Schicchi is invited by greedy relatives of a man recently dead to take the dead man's place and write a new will in their favour. He accepts the imposture, but making sure that everything will go to him, an outcome that the dead man's family dare not dispute for fear of the law. Gianni Schicchi's daughter Lauretta is in love with the gallant young Rinuccio, a member of the dead man's family, and in her famous aria O mio babbino caro she pleads with her father to allow her to marry the man she loves, an outcome eventually achieved, before the opera ends.

The Austrian composer Franz Lehár's famous operetta The Merry Widow has a plot that also revolves around the search for wealth, in this case for patriotic reasons, as the Pontevedrin ambassador to Paris tries to ensure that the rich banker's widow Hanna Glawari does not marry abroad, removing her money from her own country. In her Vilja-Lied Hanna evokes the Pontevedrin spirit, recounting the legend of a forest maiden and a lovelorn huntsman. All ends happily, as it should in operetta, when Hanna marries the young Pontevedrin diplomat Danilo, who has for long secretly responded to her love for him.

Pablo Luna was a prolific writer of Zarzuelas. His El Niño Judío concerns Samuel, the Jewish boy of the title, whose poverty prevents his marriage to his beloved Concha. On his supposed father's deathbed it is revealed that Samuel is in fact the son of a rich merchant from Aleppo, kidnapped by the man he had supposed to be his father. Together with Concha and her father, he sets out to find his true father. In Aleppo, however, they learn that Samuel's real father was in fact an Indian Rajah, with whom his mother had eloped. In India the Rajah welcomes his long-lost son and is enchanted by Concha's Spanish song, De España vengo. The jealousy of the Rajah's wife nearly leads to disaster, from which the Rajah rescues them, sending them back to Madrid with a substantial supply of gems.

Violetas imperiales, based on a French original by Henry Roussell, after earlier cinematic treatment, appeared in 1952 as a film directed by Richard Pottier, a Franco-Spanish production. The relevance of the title is found in a plot in which a violet-seller tells the fortune of the future Empress Eugénie of France, the Spanish Eugenia de Montijo. The setting is by Francis Lopez and the song, which has a charm of its own, has won considerable popularity, not least through its commercial use.

Puccini's opera La Rondine has at its heart Magda, who lives with her protector Rambaldo. She was and still is in love with Ruggero, but their attempt at establishing a sure relationship in marriage is impossible, and Magda eventually returns to Rambaldo. In the first act a young poet, Prunier, the lover of Magda's maid Lisette, sings of the story of Doretta's dream of marrying a king, but cannot end the song. Magda takes it up and provides her own conclusion in Chi il bel sogno. The opera was first staged in Monte Carlo in 1917.

The French composer Joseph Canteloube, a pupil of Vincent d'Indy, won a particular reputation for his musical depictions of the life of his native region, the Auvergne. He published four volumes of arrangements of songs from the Auvergne for voice and orchestra, and his fine arrangement of the pastoral Baïlèro is among the most effective.

Madama Butterfly, an excursion by Puccini into the exotic world of Japan, was first staged at La Scala, Milan, in 1904. Described as a Japanese tragedy, it is based on an American play, derived from an earlier story, itself having its source in a work by the French writer Pierre Loti. Cio-Cio-San, the Madama Butterfly of the title, marries an American naval officer, her sincere intentions not matched by his view of the arrangement as purely temporary. She retains her faith in him, believing that one fine day he will return to her, but when he does it is to bring with him his new, American wife, and to take away the child she has born him. Co-Cio-San, like her father before her, kills herself. The aria Un bel dì vedremo is of particular poignancy, as the girl herself, a child-bride, is alone in her trust in a man whose intentions have long been obvious to all those around her.

The Brazilian composer Heitor Villa-Lobos brought together in his series of Bachianas brasileiras inspiration derived from Bach and from his own country. The fifth of these, for soprano and at least eight cellos, is the best known. The opening aria, with an extended vocalise, is a setting of a poem by Ruth Valadares Corrêa, while the second part offers an energetic version of a poem by Manoel Bandeiro, characterized by the agility of its sometimes angular vocal line.