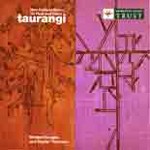 "Trust Records welcomes the year with Taurangi, a generous collection of New Zealand music for flute and piano expertly played by Bridget Douglas and Rachel Thomson.

Two CDs showcase 13 composers, with the pieces ranging from the substantial, clocking at about 10 minutes, to whimsies and miniatures.

Douglas has been extremely pro-active in commissioning new works. The affection with which the chosen composers hold her comes through in their programme notes and the quality of the music, an admiration justified by the definitive interpretations of Douglas and Thomson.

Gillian Whitehead's Taurangi is a miracle of evocation in which the mysterious cadences of waiata rise from emotionally charged chords. Moving from virtuoso outburst to transparently simple without a ruffle, the two women catch Whitehead's special mix of rugged and intimate.

Ross Harris' Ka wawara te hau delves into impressionistic dissonance, wooing our ears not with melody but with subtle inflections of colour and intensity, perfectly gauged by the players and producer Roger Smith.

Other major works include Michael Norris' Badb, a portrait of an Irish war-goddess with Douglas singing through her instrument to chilling effect, and John Elmsly's Dialogue 1, a sonata in all but name and particularly elegant in its argument.

A certain avian influence is much in evidence. Anthony Ritchie's Tui, built up from actual birdsong, has Douglas effortlessly transforming ornithology into art, while Dorothy Buchanan's more expansive Flute Song for the Birds allows the flautist to flaunt her tonal finesse.

The landscape is not forgotten in the flickering minutes of Harakeke, in which Philip Brownlee investigates the rich potential of the sound of human breath.

Brownlee's piece - along with Chris Cree Brown's The Watertable, pitting alto and bass flutes against alluring electronica - is Douglas' boldest offering in terms of contemporary idiom. And her fierce delivery of Paul Booth's Lament, written as a response to the devastation that HIV has brought about in our society, shows she is also a political animal.

"The soundscape is excellent and captures the intrepid Bridget Douglas and Rachel Thomson with sensitive immediacy. The biographical notes are complemented and enhanced by the composer's own comments."
(MusicWeb May 2006)