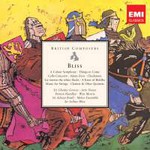 This enthralling five-CD conspectus opens with the symphony that established Bliss's name in 1922 and goes on to survey his ballet, film, chamber and vocal music in authoritative recordings, many of them attended and endorsed by the composer. The final disc shows Bliss as unmatched conductor of his own music, from the occasional prelude for the 900th anniversary of Westminster Abbey to a real rarity: Dame Joan Sutherland's first studio recording, the Song of Welcome for the young Queen Elizabeth II.

"Has Bliss's music dated irrevocably? These two discs will give you all the data you need to decide, with lively, committed performers who appear to believe in every note of these works."
(BBC Music Feb 2006)