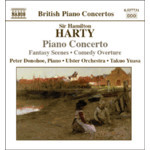 Hamilton Harty was born in 1879 in the small town of Hillsborough, in Northern Ireland, about twelve miles south of Belfast. His first teacher was his father, organist at the parish church, and a versatile musician, and the music that he heard in his youth, whether it was Handel or the folk-music of the local people, was of seminal importance in the formation of his musical personality. Harty's first musical appointments were as organist at churches in Northern Ireland. When he was about sixteen he moved to Dublin, where he met the Italian composer, pianist and pedagogue, Michele Esposito. The influence and encouragement of Esposito were of great importance to him, a fact acknowledged in the dedication of two of the works recorded here, A Comedy Overture and the Piano Concerto, to his friend and mentor.

At the end of the nineteenth century, however, Ireland did not have the musical infra-structure to support a professional career at the highest level. In 1900 Harty moved to London, where he made his name first as a piano accompanist, and then as a conductor, with the London Symphony Orchestra and later in Manchester with the Hallé Orchestra. He was principal conductor of the Hallé from 1920 to 1933, and the special relationship that he formed with that orchestra can still be appreciated in their many recordings. He championed the music of Berlioz at a time when that composer was still generally unappreciated, and he introduced new works to the British public, including Mahler's Ninth Symphony in 1930 and Shostakovich's First in 1932. After leaving the Hallé he worked mainly with London orchestras: important occasions included the first performances of Walton's First Symphony (1934) and Bax's Sixth (1935). He received a knighthood in 1925 and the gold medal of the Royal Philharmonic Society in 1934. He died in 1941.

The years 1900-1920 were Harty's most fertile period as a composer. As he achieved success as a conductor he had less time for composition. His early works consisted mainly of songs and chamber music, but he ventured increasingly into the orchestral sphere as opportunities for performance grew. Many of his works are overtly celtic in character, with titles and programmes that proclaim their Irishness, such as An Irish Symphony (1904), With the Wild Geese (1910), Variations on a Dublin Air (1912), and The Children of Lir (1938), but even in the works that are not explicitly Irish, such as A Comedy Overture and the Piano Concerto, the influence of Irish folk-music is apparent in turns of phrase, modal harmonies, and dance rhythms. Harty's creative spirit was essentially a Romantic one, and shades of mainstream European composers like Brahms, Dvofiák and Tchaikowsky are present in his music. The influence of Tchaikowsky, and Harty's idol Berlioz, are to be heard in the colourful and imaginative writing for the orchestra..

A Comedy Overture, composed in 1906 and first performed at a Queen's Hall Promenade Concert in 1907, was one of the works which brought Harty to wider notice as a composer. The title simply reflects the lively character of the music, and does not imply any theatrical connection. There are two main themes: the first is heard on the oboe after the bustling introduction, and its jaunty rhythm pervades much of the music; the second is slower and is first heard on the woodwind. Two instances must suffice to illustrate the varied and imaginative way in which Harty treats these themes. One occurs at the end of the development section, where the piccolo (over a bagpipe drone on the bassoons) embarks on a recapitulation of the first theme in the 'wrong key'. It is then left to the timpanist to beat out the right notes and prepare the way for the real recapitulation on the clarinet. The other example occurs later in the piece, when the second theme is heard on the cellos with the harmonies most subtly altered.

Fantasy Scenes (From an Eastern Romance) was composed in 1919 and first performed by the Hallé the following year. It paints the conventional 'Arabian Nights' picture of the East which was popular at that time, as made famous in music by Rimsky-Korsakov's Scheherazade. Harty provided the four movements with a programme:

I. The Laughing Juggler. The Sultan, having heard of the skill and wit of Mohammed, the 'Laughing Juggler', has commanded his attendance. The Juggler is performing his most brilliant feats, at the same time keeping up a flow of amusing chatter, when his eye falls upon Zuleika, the Sultan's favourite dancing girl. Enraptured by her beauty, he endeavours to give to his jesting words a deeper meaning, which she will understand.

II. A Dancer's Reverie. Zuleika is reclining by the fountain in the courtyard. It is dusk; she is alone. Fragments of dance-tunes mingle drowsily in her mind with thoughts of the handsome Juggler and his significant words and glances.

III. Lonely in Moonlight. The Juggler is wandering in the palace gardens by moonlight and sings of his love for Zuleika.

IV. In the Slave Market. The Sultan, having discovered the love of Zuleika and Mohammed, has banished the latter and sentenced Zuleika to be sold into slavery. It is noonday, and the market is crowded. Dealers are appraising the charms of Zuleika. They are all outbid by a stranger. It is the Juggler, disguised as a merchant. He carries off Zuleika, and the lovers escape from the city.

Harty's Piano Concerto in B minor was composed at Fiesole in Italy in 1922 while the composer was staying with the Espositos. Harty was the soloist (Beecham conducting) in the first performance the following year, and the bravura writing for the solo instrument is a reminder of what a fine pianist he was. The work is very much in the Romantic tradition, with shades of Rachmaninov in the piano and orchestral writing, the chromaticisms, the beguiling countermelodies, and the air of lingering melancholy. In the first movement the main theme is first given to the orchestra while the piano supplies a toccata-like accompaniment. The second theme is first heard on the woodwind before being taken up by the soloist. In the development section Chopinesque filigree work leads to a cadenza before the main themes are repeated. The second movement features a long, pensive melody punctuated by orchestral interludes. Trumpet fanfares herald a more decisive middle section, before the main theme returns newly dressed, with soft chimes of a bell, and solo violin and cello adding to the magical effect. Irish traits are more strongly to the fore in the robust finale, not only in the jig-like rhythms and modal character of the main material, but in passing allusions to an Irish tune, 'The Wearing of the Green'. This is first heard on horns and muted trumpets in a mysterious passage in the middle of the movement, and later on it returns in a blaze of glory.