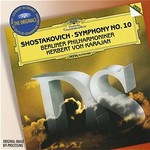 "Everything is marvellously shaped and proportioned, and the digital sound is altogether excellent." Penguin Guide***

Herbert von Karajan's digital recording of Shostakovich's Tenth Symphony (the only one of the cycle that he committed to disc) is now issued to mark the Shostakovich centenary in 2006.

"Already in his 1967 recording Karajan had shown that he had the measure of this symphony; this newer version is, if anything, even finer. In the first movement he distils an atmosphere as concentrated as before, bleak and unremitting, while in the Allegro the Berlin Philharmonic leave no doubts as to their peerless virtuosity. Everything is marvellously shaped and proportioned, and the digital sound is altogether excellent." Penguin Guide*** (1994)

"The marked element of interpretive calculation in Karajan's digital remake of Shostakovich Ten could stymie its emotional impact for some listeners. Yet the orchestral contribution is powerful and eloquent. Controversial, but essential listening." BBC Music Magazine, May 2006 ****