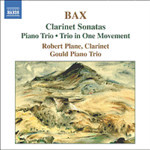 "The recording quality is typical Potton Hall, warm, detailed and well balanced and the liner notes by Lewis Foreman (who else?) very informative, even if the music is discussed in chronological order of composition, the opposite of the playing order on the disc. All in all, a Bax chamber recital to cherish."
(MusicWeb Sept 2006)

Arnold Bax came to maturity in the years immediately before the First World War and over the next thirty-odd years produced a significant body of music in most forms except opera. In his late teens and early twenties, however, while still a student at London's Royal Academy of Music, he had produced a variety of chamber works, suppressed in Bax's lifetime, including several works for clarinet, presumably written for a fellow student, though we have not been able to identify who the student may have been.

When Arnold Bax enrolled at the Royal Academy of Music in the autumn of 1900 shortly before his 17th birthday, he did so as a pianist as well as an intending composer, and in his earliest compositions, all indicators of his quickly growing technique, his complex piano parts document a rapidly growing capability. He was soon renowned for playing full orchestral scores as sight, and as well as Wagner he explored the latest developments, including the piano music of Scriabin and Debussy. Bax soaked up every influence he came upon at concerts at London's Queen's Hall where Henry Wood's taste for the latest Russian novelty was meat and drink to him.

In comparison with some of his contemporaries at the Royal Academy, notably York Bowen and Benjamin Dale, both of whom achieved early celebrity as composers and performers, Bax was a slow developer, only gradually becoming known as a composer, with songs and the occasional orchestral work. To his friends Bax adopted the stance of not caring for performance, though all seem to have thought him brilliant. In fact when he achieved his mature style and came into his ascendancy he was quickly regarded as one of the leading British composers. Between the wars the competing names from his student years became less and less well-regarded in comparison. Bax was thus celebrated for his tone poems, symphonies and concertos, his piano music and a variety of chamber music including a popular String Quartet in G, the first of three, and an Oboe Quintet which was widely played. Among the works for which he became celebrated was the Clarinet Sonata of 1934 which became one of his most frequently played works. Immediately after the Second World War he produced his final chamber work, the late Piano Trio in B flat, written in response to a request from his friend the pianist Harry Isaacs for his trio.

The following notes on the music recorded on this CD are presented in chronological order of composition. They fall into three groups: student works here revived and recorded for the first time; one from his middle period (Folk-Tale) and two later works written by Bax in his fifties and sixties.

In his autobiography Farewell, My Youth, Bax describes an academy friend of his: 'one George [Allaby] Alder, a horn-player, a wag of no mean order, and well acquainted since boyhood with Elgar'. Alder lived in Malvern, and when Bax visited him, Alder took him over to Elgar's house, Birchwood, to meet the composer. What Bax does not tell us is that for Alder he wrote a horn sonata while still a student. Recently Alder's nephew Tony (J.A.) Dutton, when searching through a dusty pile of manuscript compositions by his uncle, discovered several manuscripts of previously unknown early works by Bax. As well as the one-movement Horn Sonata, autographed by Bax and dedicated to Alder and dated January 1901, there was a Sonata in E and a Romance, both for clarinet and piano. It is these early clarinet works which are recorded here.

The early Clarinet Sonata in E postdates the early Horn Sonata. The manuscript of the Clarinet Sonata is ostensibly in one movement, but, located with the manuscript we find another movement headed 'Romance', which can be persuasively argued as the second movement of such a sonata. A clue that this is indeed the case comes in another, probably earlier, manuscript of the 'Romance' in the collection of the present author, this time given the title 'Intermezzo for Clarinet and Piano' and dated April 1901. When we find this headed by the numeral 2, it seems probable confirmation.

The early one-movement Piano Trio, which the youthful Bax designated 'Op. 4', is an ambitious score, beginning to show the fingerprints of the mature composer, especially in the ambitious, driving, piano part. The music is undated and we do not have the manuscript. Its dedication to the Irish composer 'A.J. Rowan-Hamilton', however, Bax's companion on a long sojourn in the Saxon city of Dresden in 1906, suggests that year was probably its date. Published in 1907, apart from songs it was Bax's first extended work to appear in print. The published scoring for piano, violin, and viola (and Bax places the piano first) was clearly influenced by the proselytising viola virtuoso Lionel Tertis, who was becoming very active at that time, and he persuaded Bax and many of his contemporaries to write for him. In fact in this trio Bax marks his viola part also to be playable on the clarinet, and one has to say that now having heard that version, it lies much better on this instrument than the awkwardly placed original viola part. Here Bax does incorporate elements of Irish folk-music but they never dominate, and this is never an overtly 'Irish' work.

Dated 3rd April 1918, the Folk-Tale for Cello and Piano, a surprisingly extended movement was performed almost immediately in a concert at the Wigmore Hall, on 27 April 1918, when Felix Salmond was the cellist and Bax himself the pianist. Subsequently Bax dedicated it to Salmond. Bax's cellist on this occasion was then a big name, and Salmond is now celebrated for giving, the following year, the first performance of Elgar's Cello Concerto. Unfortunately in 1922 he left for the United States, and Bax's piece was not taken up by another cellist. The subtitle 'Conte Populaire' was added when it was being prepared for publication by J & W Chester during 1920. A casual reading of Bax's subtitle is quite misleading, for Bax's intention is surely either grimly ironic or regretfully elegiac. In fact this is no salon piece and the 'popular song' is surely another of those introspective memorial pieces that followed the Easter Rising in 1916, shot through with dreams of happier times and longings for what might have been. Its character is set at the outset with the marking 'melancholy and expressive' over the piano introduction, and then rises to a fierce climax, heroically crowned by the cello's high B flat, before dying away in a 'melancholy' musing, the cello's repeated notes invoking a distant reminiscence of Irish folk-song.

Dated June 1934, Bax's mature Clarinet Sonata in D was first played at a concert of the London Contemporary Music Centre at Cowdray Hall on 17 June 1935 when Frederick Thurston was accompanied by Harriet Cohen. The sonata is two movements and the piano has a big part, always playing a significant rôle. In the first movement two subject groups each consist of a theme and a subsidiary tail. Both are elegiac, the first heart-on-sleeve, the second more chromatic and ruminative. The opening theme eventually returns in an extended passage of twilight musing. The second movement has a brilliant scherzando theme and fast passage-work in moto perpetuo style soon contrasted with a yearning lyrical melody. The sonata is dedicated to Hugh Prew, an amateur clarinettist who in the 1920s and 1930s was, with Bax, a fellow-cricketer in Clifford Bax's 'Old Broughtonians' team, which played village cricket in the west country.

When, in 1945, the pianist Harry Isaacs, an Academy student contemporary of Bax, established the trio that bore his name, with violinist Leonard Hirsch and cellist James Whitehead, they needed attractive repertoire to launch their first season. For this series of concerts at the Wigmore Hall, Isaacs asked Bax for a new trio and initially was rebuffed. Bax excused himself, writing that the medium was too difficult, and that Dvořák was the only composer to succeed with it. Having brooded about it, however, Bax later changed his mind and agreed to write the piece, the Piano Trio in B flat. The first two movements were written during the autumn of 1945 and completed at the Sussex pub, 'The White Horse' at Storrington, where Bax then lived, over Christmas. The finished score is dated 9 January 1946. It was first played by the Harry Isaacs Piano Trio at the Wigmore Hall on 21 March 1946.

Bax opens with a more or less formally correct first movement, the driving first subject given a forward impetus by its Scotch snap rhythm and accompanying piano figuration. It is strongly contrasted with the slow and quiet second idea. Bax would have probably been emphatic that there was nothing Celtic about this music, but a suggestion of dance and two wistful nostalgic episodes always quickly superseded may perhaps suggested a kinship with other more overtly Irish imagery. The elegiac slow movement is launched by a long reflective melodic line which, to this listener at least, has an Elgarian feel. An other-wordly middle section rises to a passionate climax before the opening theme returns given romantic flight by the strings. In the finale Bax adopts a drily humourous tongue-in-cheek style in 5/8. 'This is miching mallecho - it means mischief' wrote Bax, trying to describe the mood and quoting Hamlet, Act III. A broadly singing central episode brings a passing solemnity before an insistent piano rhythm announces the return of the opening music.