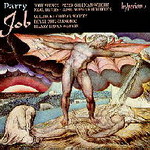 'A work of real quality and originality. A major addition to the Parry discography' (Classic CD)

There are signs of a much overdue, and very welcome, Parry revival. Apart from Blest Pair of Sirens, little of Parry's choral music has been performed – or recorded – in recent years. His star was to a large degree eclipsed by that of his slightly younger contemporary Elgar at the end of his lifetime, but there's no doubt that the latter was strongly influenced by Parry's music, especially when it came to writing his oratorios, as this recording well shows. Parry's Job, written in 1892, pre-dates all of Elgar's oratorios and it is easy to detect its influence in, for instance, The Dream of Gerontius, written ten years later.

This fine work has never been recorded before.