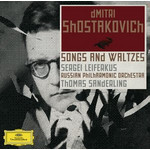 "Shostakovich having fun, and so are the musicians who relish the satire....Sergei Leiferkus is entering the final stage of his magnificent career. The voice is showing signs of wear but on this evidence – as he gleefully caricatures Lebyadkin and co. – the vocal deterioration simply adds to the sense of character."
(Gramophone Magazine Editor's Choice September 2006)

Authorities do not like satire; and totalitarian authorities fear it and loathe it. Just one of those qualities would have been enough to attract Shostakovich. He was endowed with a sharp instinct for the comic and was himself a master of the pointed witticism. In his works, of all the possible varieties of humour his special preference was precisely for satire.

The Four Verses of Captain Lebyadkin, Shostakovich's last vocal work, was finished on 23 August 1974, less than a year before his death. The cycle's morbid, warped quality, bordering on psychic disorder, the toxic pungency of colours, the bilious sarcasm appeared alongside the elevated philosophical aloofness of the Viola Sonata - Shostakovich's last work of all.

The texts of the Verses were taken by the composer from Dostoyevsky's novel The Devils of 1872. In the words of the writer, some lines of these idiotic verses were such that "no kind of stupidity could tolerate them". However, Lebyadkin himself - a "turned inside-out", conceited fool - values his creations extremely highly: "I am a poet ... a poet at heart and could receive a thousand rubles from publishers, and yet I am compelled to live in a bath-tub..."

Shostakovich's music gives a scathing portrait of Lebyadkin, with his ingratiating impudence and incoherent pretentiousness. The composer made use of the clearest grotesque-parodic methods: such as, for example, illogical, nervy exclamations at the ends of phrases; choking, hurried and fragmentary repetitions of words ("aristocra- ... aristocra- ... aristocratic child"), or, say, arising in the heat of Lebyadkin's amorous dreams, a quote from Yeletsky's aria from Tchaikovsky's Queen of Spades, which in an instant transforms into a casual-mocking cancan. Sarcastically depicting Lebyadin's "love", "morality", worldly "philosophy" and social "ideology", Shostakovich showed that this character is not only ludicrous and worthless, but also repulsive and frightening.

And from its first performance (Moscow, 11 May 1975 - the last premiere at which the composer was present) audiences (and the authorities) experienced the extraordinary topical interest of the work, composed as it was to texts a century old. An especially sharp and even ambiguous impression was created by the last song in the cycle - "A brilliant personality" - a pamphlet on the preacher of "brotherhood, equality and freedom", who, finding himself in emigration, calls the people to struggle: it was precisely at this time that Solzhenitsyn, Rostropovich and many others were in exile.

Hatred of uncultured, aggressive stupidity, boorishness and vulgarity were brought to life in the Five Romances on Words from Krokodil Magazine No. 24 (1782), 30 August 1965, composed in the same year, 1965. Krokodil was a popular satirical publication in Soviet times, and, among other things, it printed under the heading "It's quite something" a selection of genuine readers' letters. And precisely in order to underline the documentary quality of these biting "sketches from nature", Shostakovich included in the title of his work the actual issue number of the magazine. In well-aimed, laconic lines he sketched the mediocre emotional lives of his anti-heroes, their idyllic enthusiasm and hypocrisy or frank parasitism ("A Difficult Request"), the primitivism of the thoughts, aspirations and behaviour of the inhabitants of a narrow little world, whether a hooligan-demagogue unleashing himself ("First-hand evidence") or his cowardly victim ("Discretion").
The composer's widow, Irina Antonovna, commissioned Shostakovich's pupil Boris Tishchenko to orchestrate the song cycle on words from the Krokodil magazine especially for this recording.

Less than ten years before his demise, in a little vocal work with a very long title: Preface to the Complete Edition of my Works and a Brief Reflection Apropos this Preface, Shostakovich made an attempt at predicting the fate of his output, appearing as it were in the role of an auto-futurologist. In the text, which he wrote himself, anticipating, probably, the chorus of official greetings and false eulogies of other "well-wishers", the composer sarcastically paraphrased Pushkin's epigram on a giftless hack-writer, but re-addressing it to himself and completing the highly impartial "Reflections" so that it also applied to the majority of his contemporaries. In the night after the mishap-plagued premiere of the Preface on 28 May 1966 in Leningrad, Shostakovich had a heart attack - satire is a business for those strong not just in spirit but also in body.

In 1960 in Leningrad a volume of poems by Sasha Chorny (real name Alexander Glikberg, 1880-1932) was published. This deeply original Russian poet of the Silver Age was completely unknown to Soviet readers, inasmuch as shortly after the Revolution he emigrated, and everything connected with the culture of the Russian émigrés was strictly suppressed by the censors in the USSR. In the words of a contemporary critic (Korney Chukovsky), the young poet "engaged in hand-to-hand skirmishing with the reactionary epoch and delivered blow after blow with his murderously derisory verses". With the sharpest accuracy Sasha Chorny made fun of the petty bourgeois outlook, philistinism, spiritual emptiness and moral degradation of that part of the Russian intelligentsia which after the defeat of the 1905 Revolution found itself at the mercy of trivial thoughts and petty passions.

The hatred of baseness, meanness and boorishness, which nourished the satire of the poet, was also close to Shostakovich's heart. Just as close were the poet's individual blend of lyricism and the grotesque. When Chorny's book fell into the composer's hands, he composed his song-cycle Satires (Pictures of the Past) - five romances to words of Sasha Chorny op. 109 - in the course of a few days in the summer of 1960, dedicating them to Galina Vishnevskaya. Fearful that the title "Satires" would attract opposition from the Soviet "cultural leadership", the singer suggested that he should add the subtitle "Pictures of the Past": this was not about our happy lives, you see, it was about "the accursed past". The premiere on 22 February 1961 in the Small Hall of Moscow Conservatory (accompanied by Mstislav Rostropovich) was a triumph.

Shostakovich's Satires are vividly theatrical. The title of each romance is announced by the performer in the first line each song, and the music makes extensive use of parodic "actorly" principles of repetition of individual words or fragments of phrases ("They bang their heads against the wall" in "Descendants", "I you, and you me" in "Kreutzer Sonata"). On several occasions the comic effect arises thanks to reminiscences of widely known (in Russia) musical works by other composers: Rachmaninov's romance "Spring Waters" in "Awakening of Spring", Lensky's arias from Tchaikovsky's Eugene Onegin and Beethoven's "Kreutzer" Sonata in the last movement of the cycle.

The Waltz Suite was put together at the end of the 1950s from film scores (the exception is the concluding movement of the Suite, taken from the incidental music to Balzac's Human Comedy) and published in 1959. Shostakovich was very fond of the waltz as a dance form. We find its changeable, captivating, bewitching rhythm not only in his ballets, theatre and film scores, but also in the most refined episodes of his quartets and symphonies. The pieces included in the Suite demonstrate the composer's startling ability to master and re-examine the ubiquitous rhythms and intonations both of the Russian domestic waltz and of the European dance classics.