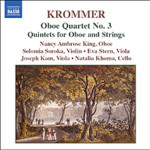 Writing mainly in the style of Haydn and Mozart, he served as Kapellmeister in three major European courts, including that of the Emperor Franz I of Austria, to whom he was appointed court composer in 1818.

Franz Vincent Krommer (František Vincenc Kramář) was born in Kamenice in 1759. He became one of the most successful Czech composers in Vienna during the late eighteenth and early nineteenth centuries. Writing mainly in the style of Haydn and Mozart, he served as Kapellmeister in three major European courts, including that of the Emperor Franz I of Austria, to whom he was appointed court composer in 1818. Although Krommer is best known today for his vast output of wind concertos and wind octets, he also wrote symphonies, many string quartets and quintets, other chamber works and a few sacred pieces. To his contemporaries Krommer's string quartets seemed to equal those of Haydn and rival those of Beethoven. His many works for woodwind were technically very difficult, indicating that he wrote for the best performers of his time. These works are an important part of the wind repertoire and continue to gain recognition and popularity in the present day. In the 1790s he was regimental composer to a Count Karolyi and music director of the orchestra of Prince Antal Grassalkovich de Gyarak, which was reduced to a Harmonie-Musik ensemble on the Prince's death in 1796.

It was in the remarkable compilation of Czech oboe works catalogued by Miroslav Hošek, retired principal oboist of the opera orchestra at Olomouc and Professor of Oboe at the Conservatory at Kroměříž, that I found evidence of two quintets and a third quartet written by Franz Krommer for oboe and strings. Hošek's Catalogue of Oboe Literature by Czech and Slovak Authors was published in 1969 by the Czechoslovak Music Information Centre Prague, and listed these works in the record of Krommer's output. I was, however, unable to find any current publication or recorded evidence of either work. I owe a debt of gratitude not only to Miroslav Hošek, who provided the parts for Quartet No. 3, but to the Salzburg State Library in Austria for providing copies of the Quintet parts housed in their collection.

Krommer's quartet and quintet writing is virtuosic in a way similar to Haydn and Beethoven. These works highlight the changing rôle of the oboe in the late eighteenth century, as the tessitura of oboe parts became higher and the technical demands far greater. Compared with Bach's writing for the oboe in his cantatas, the compositions of Mozart and Krommer are significantly higher in range and demand far greater technical virtuosity. While the Mozart Oboe Quartet was notable for its extreme high register with several high Fs in the oboe part, the Krommer Quintets reach as high as a G on the oboe. This virtuosic chamber music replaced the solo sonata of the Baroque period as the main vehicle for displaying the technical capabilities of the instrument and its performers. The violin has a prominent part almost equal to the oboe, and the viola parts are surprisingly complex. The Quintets and the Quartet are similar to most oboe chamber music of the Classical era in their virtuosi treatment of the oboe as well as the long, semi-fugal sections and solo passages written for all the instruments except for the cello. As these manuscripts survive in Salzburg, it suggests that they were quite possibly performed there.

Prominent oboists in Salzburg and Vienna from 1780 to 1800, who may have had the opportunity to perform these fine works, were Josef Cervenka, an oboe soloist of the emperor's court orchestra in Vienna (1794-1829); Josef Fiala, who lived in Salzburg, but in 1786, won the favour of W. A. Mozart and performed his solo works in Vienna; Anton Fladt, from Munich, but who performed in Vienna during a 1793 concert tour; Georg Triebensee (the elder), the first oboist of the Harmonie-Tafel-Musik of the Emperor Joseph II from 1782; Josef Triebensee, his son, the first performer of Beethoven's Quintet in E flat major, Op. 16; Jan Vent, who performed in Vienna's opera orchestra from 1777, the imperial court orchestra in 1787, and in 1782 became a member of an imperial Harmonie; as well as Giuseppe Ferlendis and Marx Berwein.

According to Bruce Haynes (Music For Oboe 1650-1800), Krommer's two known and published Oboe Quartets were written between 1780 and 1800. We do not know to whom they were dedicated. Krommer may have composed them during his time in Hungary. A handwritten copy of a third quartet was made by Miroslav Hošek in 1962. It was copied from the private archives of Miroslav Biba, concertmaster of the opera theatre orchestra of C. Stibor (today The Moravian Theatre) in Olomouc, in the Czech Republic. This third quartet had virtually disappeared from the oboe literature until this recording.