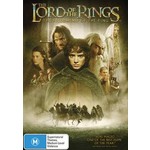 Fate Has Chosen Him. A Fellowship Will Protect Him. Evil Will Hunt Them.

In a time before history, in a place named Middle-earth, a dark and powerful lord has brought together the forces of evil to destroy its cultures and enslave all life caught in his path. Sauron's time has come and he needs only one small object, a Ring that has been lost for centuries, to snuff out the light of civilization and cover the world in darkness. Though he has put all of his power into the search for it, fate has put it in the hands of a young hobbit named Frodo Baggins (Elijah Wood), who inherits the Ring and steps into legend.

With the help of a loyal fellowship comprised of hobbits Sam (Sean Astin), Merry (Dominic Monaghan) and Pippin (Billy Boyd); Gimli the dwarf (John Rhys-Davies); and humans Aragorn (Viggo Mortensen) and Boromir (Sean Bean); and with the guidance of the wizard Gandalf (Ian McKellen), and elves Arwen (Liv Tyler), Galadriel (Cate Blanchett) and Elrond (Hugo Weaving), Frodo must journey to the Mount of Doom to destroy the Ring. If he doesn't find a way, no one will. Part one of The Lord of the Rings trilogy, Peter Jackson's film brings J.R.R. Tolkien's tale vividly to life.

The Lord of the Rings - The Two Towers