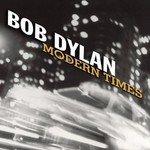 The ten-track follow-up to 'Love and Theft' is the first new album from Dylan in over five years! This special edition of the album, contains a bonus DVD, featuring four additional songs and more!

"Epic...Heartbreaking...Dynamic...Apocalyptic!....[Modern Times] is in the passionate tradition of his last two superb albums, 1997's biting, bruising Time Out Of Mind and 2001's more jubilant and eclectic "Love And Theft". Dylan looks into the heart of the modern age and tells us what he sees in a vision still commanding and bold."
- Robert Hilburn, Mojo

"The state of America, vibrant sexuality, depression-era jazz and blues, and some excellent jokes; another classic from the revitalised master" - 5 Stars (out of 5) - Uncut

'Modern Times' is the ten-track follow-up to 'Love and Theft' (issued in 2001), making it the first new album from Dylan in over five years!

This special edition of the album, contains a bonus DVD, featuring four additional songs and more!

Four of the tracks are quite lengthy, including the eight-minute "Spirit on the Water" and the nine-minute "Ain't Talkin", which closes the album.

Columbia Records Chairman Steve Barnett stated, "A new Bob Dylan record is an event. Bob is that rare artist whose music defies all trends and resonates throughout all levels of our culture, and he continues to be as contemporary and relevant as any artist in music. We're approaching 'Modern Times' as the third release in an outstanding trilogy of recorded works - along with 'Time Out Of Mind' and 'Love and Theft'. This is a staggering record by any standards, and is a major priority for our company, worldwide."

Bob Dylan is one of the world's most popular and acclaimed songwriters, musicians and performers, having sold nearly 100 million albums and performed literally thousands of shows around the world in a career spanning five decades.

His most recent studio albums, 'Time Out Of Mind' and 'Love and Theft' have been among his most commercially successful and critically lauded, each having sold more than a million copies in the U.S. and earning Grammy nominations for "Album Of The Year" ('Time Out Of Mind' won that award in 1998).

Disc 2 - DVD:
Details to be confirmed

Whatever People Say I Am, That's What I'm Not

Both Sides of the Gun
more suggestions…