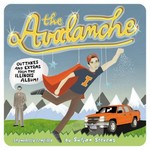 Sufjan Stevens
The Avalanche - Outtakes and Extras From the Illinoise Album

The 'Illinoise' record was originally conceived as a double album, culminating in a musical collage of nearly 50 songs - but the project was cut in half. Now, here are the rest of the recordings, and more!

Sufjan Stevens is an American musician, songwriter, and multi-instrumentalist from Detroit, Michigan. He is known for his lyrically focused and instrumentally rich songs that often relate to faith and family. He is considered part of the folk revival in indie pop, but his influences are very broad, including electronica, the jazz of Vince Guaraldi, and the academic minimalism of Reich and Glass. Stevens has announced plans to make an album for each of the 50 US states, beginning the series with the albums 'Michigan' (2003) and 'Illinoise' (2005).

The little secret behind the 'Illinoise' record is that it was originally conceived as a double album, culminating in a musical collage of nearly 50 songs. But as the project began to develop into an unwieldy epic, common sense weighed in - as did the opinions of others - and the project was cut in half.

As 2005 came to a close, Sufjan returned to the old, forsaken songs on his 8-track. Sufjan gleaned 21 useable tracks from the abandoned material. Some songs were in finished form, others were merely outlines, gesture drawings, or musical scribbles mumbled on a hand-held tape recorder. Most of the material required substantial editing, new arrangements or vocals.

Sufjan invited many of the original Illinoisemakers to fill in the edges: drums, trumpet, a choir of singers. The centrepiece, of course, was the title track - "The Avalanche" - a song intended for the leading role on the 'Illinois' album but eventually cut and placed as a bonus track on the vinyl release.