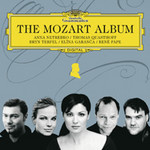 A celebratory vocal feast to honour one of the greatest musical geniuses of all time: that's the aim of this gala of international stars.

Yes, they do exist, the Mozartians of our day. It isn't necessary to deliberate for long to single those names out from the almost endless list of Mozart singers of today - those artists whose unmistakable voices and compelling charisma excite music lovers from New York and Tokyo to Vienna and Salzburg. But to bring this hand-picked company together at the same time and place for a personal homage to the Salzburg master: that has required a special unifying idea. And this feat is what Deutsche Grammophon has pulled off - at least on CD - with its Mozart Gala, making possible the seemingly impossible.

Anna Netrebko, Salzburg's acclaimed Donna Anna and Susanna, leads this ensemble of Mozart specialists, whose as-yet unreleased recordings have been brought together and arranged to form a quite extraordinary Mozart bouquet. Along with DG old hands like Thomas Quasthoff and Bryn Terfel, such new exclusive signings as Elīna Garanča and René Pape are accompanied by podium stars like Claudio Abbado and Sir Charles Mackerras.

Featured in excerpts from Idomeneo, Le nozze di Figaro, La clemenza di Tito as well as Don Giovanni, Anna Netrebko turns this anniversary album into an "Evening with Anna & Friends". In this Mozart gala the focus is on Anna Netrebko, whether as soloist in Elettra's bravura aria "D'Oreste, d'Aiace" or floating Ilia's lyrical "Zeffiretti lusinghieri" or - no less popular - Susanna's aria from Act IV of Figaro, which she sings at the Mozart Year's Salzburg Festival, or in the "duet of all duets" from Don Giovanni - "Là ci darem la mano - with Thomas Quasthoff and the lovely "Ah, perdona al primo affetto" from La clemenza di Tito with mezzo Elīna Garanča.

Bryn Terfel allows himself a musical joke as he lavishes his artistry on the concert aria "Männer suchen stets zu naschen" for this project, turning a tiny gem into two minutes of unforgettable Mozart singing of the highest calibre. And when you have Garanèa elevating Sesto's "Parto, parto" from La clemenza to the level of incandescent music drama, and Quasthoff, Pape and Erika Miklósa as, respectively, Papageno, Sarastro and the Queen of Night joining forces for a mini-Magic Flute, then it's safe to say that this "Who's Who" of modern Mozart singing has recorded a "Best of Mozart" for now and for ever.

Looking at this gala selection of Mozart stars in greater detail reveals the stylistic range of interpretations that it contains, from large-scale symphony-orchestra sonorities on one extreme and historically inspired "original" timbres on the other: while Dresden's illustrious Staatskapelle represents the time-honoured "classical" Mozart tradition, the Scottish and Mahler Chamber Orchestras as well as Claudio Abbado's newly founded Orchestra Mozart - here in its CD debut - are inspired in their music-making by the "authentic" style favoured by so many Mozartians in 2006.

A celebratory vocal feast to honour one of the greatest musical geniuses of all time: that's the aim of this gala of international stars. And once quiet has finally returned to peaceful Salzburg in autumn after the storm of an exceptional summer, there will be this recorded homage from Anna Netrebko and her friends to sweeten the pill of waiting for the next Mozart anniversary.