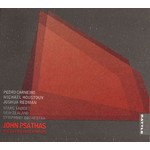 Three concertos bring three soloists at the top of their game, together with the NZSO to create the most ambitious orchestral recording project in New Zealand history. Includes a DVD about the recording featuring interviews and footage from the recording sessions.

With still increasing commissions from international festivals and performers, he is New Zealand's most internationally performed composer.

At Victoria University School of Music he is nurturing a new generation of composers.

He was awarded Officer of the New Zealand Order of Merit (ONZM) in the 2005 list.

The NZ Herald named him as a contender for New Zealander of the Year 2004.

John Psathas has received numerous awards, including the 2002 SouNZ Contemporary Award for View From Olympus, and was named an Arts Laureate by the Arts Foundation in 2003.

NOTE: DVD is PAL (Not playable in US or Canada)