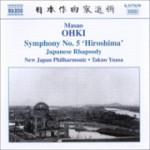 "The Hiroshima Symphony is a startling, bracing and deeply felt meditation on the effects of war – a lesson that still needs to be repeated, again and again"
(Recording of the Month MusicWeb Nov 2006)

Masao Ohki was born on 3 October 1901 in Iwata, a small provincial city on the Pacific coast in central Japan, and grew up in the larger nearby city of Shizuoka. His father was a teacher at a girls' high school and he spent his childhood during a period when westernisation was bringing an interest in western music, with operas and orchestral concerts occasionally heard in big cities like Tokyo. The circumstances in provincial cities were different. There were only a few pianos in Shizuoka and not even a small orchestra. Musical interest was mainly in Japanese traditional works. Ohki's father liked to play the shakuhachi, a bamboo flute, and Ohki himself played it from his childhood. With unstable pitch and a mysteriously 'cloudy', somewhat husky timbre, the instrument has especially been associated with asceticism and Zen meditation. The experience of shakuhachi music was to exert a significant influence on Ohki's own work. At the same time he had some experience of western instruments, and was able to hear recordings of classical Chinese operas and arias from Bizet's Carmen, as well as a variety of Japanese traditional music. The basis of Ohki's melodies was always the shakuhachi music and the recordings he heard, and, above all, Japanese traditional music.

After completing his junior schooling in 1910, Ohki went on to technical senior high school in Osaka and majored in chemistry. He was now able to study the shakuhachi with master-players, and formed a male choral group with his classmates. At the same time he had an opportunity to hear Beethoven's Symphony No. 5 and Tchaikovsky's '1812' Overture. This was his first encounter with full-scale orchestral music. Deeply impressed by these works, he wished vaguely to write orchestral music, but lacked the means to pursue this ambition. He therefore started by studying vocal music more minutely and by writing nursery songs.

Graduating in 1921, he began work as an engineer for a factory in Tokyo and continued his studies of vocal music, but soon came up against the limitation of Japanese singers singing in foreign languages with pronunciation and intonation essentially different from those of the Japanese language. Leaving his job, he moved to Ueda, a small city in the mountainous area of central Japan, to teach at a girls' school, and then finally made up his mind to devote himself to writing orchestral music.

Believing that music should possess power to affect society and that good music could contribute to the pursuit of happiness of the people, Ohki took Tchaikovsky as his model, seeking to make the most of Japanese traditional music represented by the shakuhachi. To realise his dream, he returned to Tokyo. Working part-time to keep himself, he allotted as much time as possible to the study of composition, working under Giichi Ishikawa, who had studied music in California from 1906 to 1920. Under his guidance, Ohki studied music theory from the beginning. In addition to Beethoven and Tchaikovsky, he was attracted to Mussorgsky's earthy melodies, the precise orchestration of Rimsky-Korsakov and Ravel, Debussy's sensitivity and the fusion of popular and modern sonority found in Stravinsky's L'oiseau de feu.

From around the 1930s Ohki started to conduct his own orchestral works and in 1939 won first prize in the Weingartner Competition, when his co-winners included Shukichi Mitsukuri, Hisatada Odaka and Humiwo Hayasaka (Naxos 8.557819). His prize-winning works were Five Fairy Tales (1934), inspired by Mussorgsky's Pictures at an Exhibition, and Idea of the Night (1937), in which he attempted the orchestration of shakuhachi music. The outbreak of war prevented the performance of these works in Europe, which were to have been conducted by Felix Weingartner.

The 1930s saw drastic and rapid changes in political affairs. In the wake of the Depression, Japan tried to form a Japan-centred economic bloc in Asia, which gave rise to militarism and nationalism. Democracy and international socialism were gradually replaced by the idea that eliminating political influences from Europe and the United States would bring happiness to the people in all Asian countries as well as in Japan. In the latter half of the 1930s Ohki came to sympathize with this. His inclination to Japanese traditional and popular music was, despite his attachment to shakuhachi music, not so much to be linked with his concern for Japanese labourers and peasants, oppressed by the upper class, as with his sympathy with Asian people oppressed under colonialism by Europe and the United States.

Japanese Rhapsody was composed at the request of NHK (Nippon Hoso Kyokai/Japan Broadcasting Corporation) and was first given in a radio programme on 18 May 1938 by the Japan Broadcasting Symphony Orchestra (the New Symphony Orchestra, later to become the NHK Symphony Orchestra) under the composer. The scoring includes double wind, celesta, piano and various percussion instruments. Here Ohki tried to express the optimism of the Japanese people, who were going to spread their wings in Asia. The two main themes are drawn from Japanese folk melodies. One is dance music for a summer festival in Iwakidaira of the Tohoku district, based on the pentatonic Ritsu scale (E - F sharp - A - B - C sharp), the other is taken from Kisobushi, a folk-tune from the mountainous district of central Japan, based on a pentatonic Ryo scale (E - F sharp - G sharp - B - C sharp). The work is in three parts, an Allegro, with a slow introduction, using elements of Kisobushi, a first theme from the dance music of Iwakidaira, and a second theme using Kisobushi. This main part is repeated, with variants suggested, and the third part is a free recapitulation. The work reflects the influence of Stravinsky's L'oiseau de feu and Petrushka.

During World War II, Ohki wrote patriotic works, but the Japanese defeat and American occupation led him to the ancient statues of Buddha, reflected in the 1948 Six Preludes and Postlude to Classical Statues.

Dissatisfied with this line of thinking, he turned again to socialism, opposing the oppression of the working class at home or abroad. For him the atomic bomb was a symbol of modern imperialism, which had hindered realisation of the happiness of the labouring class. The full horror of what had happened at Horishima and Nagasaki was finally revealed with the end of the American occupation in 1952. The work of the painters Iri and Toshi Maruki and their The Hiroshima Panels were very good models for Ohki in his desire to express in music the rôle of the atomic bomb in blocking the way to human freedom, to the future of mankind and to the realisation of the dream of liberating the labouring class. The paintings, rich in subtle shadings, corresponded to Ohki's inclination to 'cloudy' sonority. He took up all the six paintings published by 1953 and by adding Prelude and Elegy to the six movements based on the six paintings, he completed an eight-movement symphonic fantasy To The Hiroshima Panels in 1953. The work, which was later renamed Symphony No. 5 'Hiroshima', was first performed by Masashi Ueda conducting the Tokyo Symphony Orchestra on 1 November of the same year. The scoring includes triple winds, with celesta and varied percussion. Unlike the optimistic Japanese Rhapsody, the music is characterized by chromatic melodies within narrow ranges, dissonant harmonies, tone-cluster-like sounds generated by the accumulation of semitones and special effects by strings and wind.

In Prelude: Stolid Lapse of Time - The Voice of Human Conscience - Chaos - Stillness, many of the principal materials of the whole work are found. In the opening, Stolid Lapse of Time, the pizzicato double bass is soon joined by the cello, suggesting the countdown before dropping an atomic bomb. The violin moves about lifelessly and vacantly in the upper range, the clarinet and the flute suggest Noh-like melodies, often associated with the idea of death. The Voice of Human Conscience, with viola, cello and double bass, evokes the music of Beethoven, and the voice of the proletariat. Chaos mirrors the explosion of the atomic bomb with the full orchestra. Stillness refers to the world of death after the bombing, where harmonics of the violin and the celesta generate chilly sounds, and the timpani and the lower strings exchange motifs in a whole-tone scale. Ghosts [Track 3] is the music of the procession of the casualties, some of whom seem alive and others dead. The strings play a motif slowly descending in the range of the minor third, as if ghosts were walking step by step. The trumpet persistently repeats the same note, implying the inevitable fate of Hiroshima, rather than The Voice of Human Conscience. Fire [4] depicts the fires just after the bombing, in its direct meaning, and in its symbolical meaning the terror that quickly seizes on the people, expressed by rapid chromatic runs and various kinds of trills, tremolos and glissandos through the whole orchestra. Water [5] depicts casualties wandering about seeking water. Eventually Rainbow [6] appears, imparting eerie colours to the world of death. The clarinet and the solo violin mysteriously playing tremolos in harmonics once again suggest the Noh-style motif of death. Boys and Girls [7] continues to deal with the motif of death from Rainbow, a polyphonic requiem for children killed by the atomic bomb. Atomic Desert[8] is in the style of Stillness section of Prelude and Ghosts. The piccolo assumes the idea of death, imitating a Noh instrument Nokan, which takes charge of the upper register. The song of birds in the other world is added by the woodwind. The special effects generated by descending movements of the strings in persistent harmonics seem, in themselves, to predict Penderecki's Threnody to the Victims of Hiroshima. The longest movement, Elegy, is written in a kind of sonata form. Two elements are contrasted in this movement. One is The Voice of Human Conscience suggested in Prelude and the requiem-like music of Boys and Girls, both of which are on the side of justice. The other is phrases from the preceding movements expressing destruction and terror caused by the atomic bomb. The conflict is unresolved, and whether the terror is broken down or not depends on subsequent human conscience.

The Hiroshima Symphony had a striking impact on Japanese audiences, establishing Ohki as a left-wing composer fighting against imperialism. He also won great success in his anti-atomic-bomb cantata Get Humans Back (1961-1963). Ohki visited the Soviet Union and North Vietnam as a leading composer representing the labouring class of Japan. Hiroshima Symphony was performed by Arvid Jansons and the Leningrad Philharmonic in the Soviet Union, and by Leopold Stokowski in the United States. The thought and the sounds of Hiroshima Symphony probably had some influence on Soviet music after the 1960s. Ohki died of cancer on 18 April 1971. His last work was Symphony No.6 'Vietnam' (1970), dedicated to the Vietnamese people who fought against imperialist America.