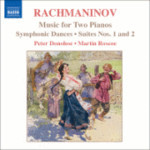 The Russian composer and pianist Sergey Rachmaninov was born in 1873, the son of aristocratic parents. His father's improvidence, however, led to a change in the fortunes of the family when increasing debts necessitated the sale of one estate after another, followed by removal to an apartment in St Petersburg. It was there that Rachmaninov, at the age of nine, entered the Conservatory on a scholarship. The subsequent separation of his parents and his own failure in general subject examinations brought about his move to Moscow, where he was accepted as a pupil of Nikolay Zverev, a pupil of John Field's pupil Dubucque and of Adolf von Henselt. Rachmaninov lodged in Zverev's house, where the necessary discipline was instilled, providing him with the basis of a subsequently formidable technique. In 1888 he entered the Conservatory as a pupil of his cousin Alexander Ziloti, a former pupil of Zverev and later of Liszt. Rachmaninov's other teachers at the Conservatory were Sergey Taneyev, a former pupil of Nikolay Rubinstein and Tchaikovsky, with whom he studied counterpoint, and Rimsky-Korsakov's former pupil Anton Arensky, Rachmaninov's teacher for fugue, harmony and free composition. In Moscow, as time went on, he won considerable success, both as a performer and as a composer, after graduating in the piano class of the Conservatory in 1891 and in composition the following year.

The Revolution of 1917 brought many changes. While some musicians remained in Russia, others chose temporary or permanent exile abroad. Rachmaninov took the latter course and thereafter found himself obliged to rely on his remarkable gifts as a pianist for the support of himself and his family, at the same time continuing his work as a conductor. Composition inevitably had to take second place and it was principally as a pianist, one of the greatest of his time, that he became known to audiences. Concert-tours in America proved lucrative and he established a publishing enterprise in Paris, where he lived for some time, before having a house built for himself and his family at Hertenstein, near Lucerne. In 1939 he left Europe, finally settling at Beverly Hills, where he died in 1943.

The year 1893 brought the première of Rachmaninov's graduation opera Aleko and compositions that included The Rock, an orchestral fantasy inspired by a story of Chekhov, a series of songs and other pieces, and the Fantaisie-tableaux for two pianos, otherwise known as Suite No. 1, Op. 5. This last was dedicated to Tchaikovsky, whose death in the same year Rachmaninov commemorated in a Trio élégiaque.

The suite consists of four movements, each headed by an illustrative quotation. The first, Barcarolle, draws something of its inspiration from lines taken from Lermontov's Gondola Song, suggesting the sound of waves in the evening against the gondola's oar and the transitory nature of love. In G minor, the movement depicts the motion of the water in its opening arpeggios, through which fragments of melody appear from the second piano. Trills lead to a central G major section, a melody again heard against the ripple of the water, before the opening key and mood is restored. The D major second movement, La nuit… l'amour (Night… Love) is headed by a translation of the first poem in Byron's narrative sequence Parisina, the story of the fate of the heroine after the discovery of her illicit love for her husband's bastard son. The poem sets the scene:

This night music allows only the song of the nightingale to be heard, through the arpeggiated chords and more elaborate figuration suggesting the sounds of the winds and waters. There is a dramatic climax before the music subsides and quietness falls. Les larmes (Tears) is in G minor and headed by lines from the Russian romantic poet Tyutchev that were also set in a vocal duet by Tchaikovsky and by Taneyev. Rachmaninov draws inspiration from the bells of the eleventh-century Cathedral of Saint Sophia at Novgorod, heard from the outset, and suggesting other more or less contemporary Russian compositions. The final Pâques (Easter) is again dominated by bells, often recalling Mussorgsky's Great Gate of Kiev. The epigraph is taken from a poem by the earlier philosopher and poet Aleksey Khomyakov, a champion of Russian Orthodox belief. The Easter chant of the risen Christ is heard amid the tolling of the bells.

Rachmaninov wrote his Suite for two pianos, Op. 17, between December 1900 and April 1901. It is therefore exactly contemporaneous with the famous Piano Concerto No. 2 in C minor. He played it through with his friend, the pianist and teacher Alexander Borisovich Goldenweiser, to whom it is dedicated, a reflection of their relationship and the fact that they had been performing two-piano music together at this time. It had its first performance in Moscow towards the end of 1901, played by Rachmaninov and his former teacher, Ziloti. Its publication in October 1901, the first since 1896 and the failure of his first symphony, marks his return to composition. The Suite opens with an Introduction, a march, framing a secondary theme, before disappearing into the distance in a serene coda. The Waltz, generally light-hearted with its off-beat rhythms, includes, in one of its secondary themes, a distinct reference to the Dies irae of the Requiem Mass, a recurrent motif in Rachmaninov's music. The lyrical Romance is followed by the lively Tarantelle, its principal theme a Neapolitan melody, a brilliant conclusion to a work that retains an important place in two-piano repertoire.

The Symphonic Dances were written towards the end of Rachmaninov's career, in the autumn of 1940, after a summer spent at an estate on Long Island. He had the idea that they might be used for a new ballet by his friend Fokin, but the latter's death in 1942 put an end to that. The three movements of the Symphonic Dances together form what is a virtual symphony. The opening dance, with its suggestions of Prokofiev's Romeo and Juliet, has an intensely felt melody in its central section and includes what may be a closing reference to the ill-fated First Symphony. Rachmaninov had intended the first dance to represent Mid-day. The second was Twilight, and the third Midnight. Twilight brings its ghosts, figures in some haunted waltz, while Midnight struggles between Death, represented by the Dies irae, and the triumphant Alleluia from the Russian liturgy. With this Rachmaninov's last composition ends.