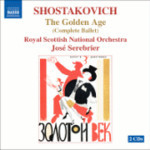 "This is a breathtaking recording in many ways. It's also complete and uncut and the notes are good. Don't hesitate - this is one that needs to be listened to, even in this crowded year of Shostakovich revelations"
(MusicWeb Nov 2006)

"This Naxos double has no faults whatever - and I usually find something to whinge about. Not this time because this recording shows understanding of a great composer with the genius already in him as a young man."
(MusicWeb March 2007)

Although the music spanning the decade between his First and Fourth Symphonies (1925-1935) was beginning to be explored in his lifetime, the three full-length ballet scores that Dmitry Shostakovich wrote during this period remain among his least known works: as much the victim of cultural conflicts in their own time as of today. In the case of The Golden Age, which ran for twenty performances after its première at the State Academic Theatre in Leningrad on 26 October 1930, matters cannot have been helped by the failure of the composer and the choreographer Vasily Vainonen to agree on the correlation between music and dance; so clearing the way for the reactionary (as well as avowedly anti-Shostakovich) Russian Association of Proletarian Musicians effectively to shoot the whole production down in flames.

Even before the première Shostakovich had prepared a suite from the ballet: comprising items 1-2, 9, 11 and 30 of the complete score. First performed on 19th March, it soon found its way into the international repertoire, thus keeping the ballet's name alive during the remaining 45 years of its composer's lifetime. Numerous items were re-deployed in his subsequent two ballets, The Bolt (1931) and The Limpid Stream (1934), and then in the Ballet Suites Shostakovich cocompiled at the beginning of the 1950s. One item, the Polka (No. 30), is probably the most transcribed piece in his output. This recording, based on the listing of the Leningrad première as given in Yefim Sadovnikov's 1965 catalogue and following Manashir Yakubov's edition of the piano score (Moscow, 1995), considered to be the composer's final version, is the first to present the work complete with all repeats observed; enabling listeners to assess the ballet in all its exhilarating, if reckless audacity.

Based on a scenario entitled Dynamiada by the film-maker Alexander Ivanovsky, The Golden Age is typical fare from a brief but vital period in Soviet culture when provocation was the norm. It revolves around the visit of a Soviet football team to a Western city (referred to just as 'U-town') at the time of an industrial exhibition; only for its heroic sporting and social endeavours constantly to be undermined by hostile administrators, decadent artistes and corrupt officials. While the theme of Soviet citizens upholding their integrity in the face of the capitalist West was hardly to be objected to, the disparity between Vainonen's and Shostakovich's intentions (evident in a comparison of titles employed in the score with those in the scenario: the synopsis below uses elements from both these sources) proved irresolvable. Yuri Grigorovich's early 1980s choreography for the Bolshoi Theatre attempted a different, non-football approach, while that by Noah D. Gelber created for the Mariinsky Theatre in Shostakovich's centenary year was even more radical in its being set variously during 1930, 1945 and 'the present'. Both versions cut and substantially rearranged the score, which is heard here in its three-act, six-scene entirety.

The Prelude sets the scene for a waltz-time Procession of the Guests of Honour [1/2], which duly launches Scene One at 'The Golden Age of Industry Exhibition'. There follows a rumbustious Inspection of the Display Windows [1/3], followed by the mock-elegant Demonstration of 'Important' Exhibits that also marks the Appearance of the Soviet Football Team [1/4]. A cascading piece now for the Magician-Advertising Agent, mutating into the energetic Dance of the Hindu [1/5]. Boxing as an Advertising Stunt [1/6] is a brief scenic passage, before a heated outbreak of Scandal during the Boxing Match and the climactic Entrance of the Police [1/7] to round off Scene One in forceful fashion.

The second scene takes place at the 'Exhibition Hall' and opens with Dance of the Golden Youths [1/8], where the prominence of solo instrumental 'breaks' is one instance of the pervasiveness of jazz idioms in this score. The Dance of Diva [1/9] that follows is perhaps the ballet's finest number: a symphonic adagio that builds from its haunting melodies for soprano saxophone and violin to an orchestral climax of great expressive power, before concluding in gentle repose. Action resumes with the Appearance of the Soviet Football Team [1/10], during which Diva's Variations features a series of star-turns, followed by the energetic Soviet Dance [1/11]. A scenic passage now as Diva asks the Leader of the Soviet Team to Dance with Her [1/12], then comes the insinuating Dance of Diva and the Fascist [1/13], followed by a raucous Scene for the same duo. The explosive Dance of the Black Man and Two Soviet Football Players [1/14] precedes a suave item (complete with wailing flexatone) in which The Supposed Terrorist ('The Hand of Moscow') [1/15] appears. A nimble woodwind depiction of General Confusion, and The Embarrassment of the Fascists [1/16], leads to the impassioned evocation of A Rare Case of Mass Hysteria [1/17]. Following the quietly sardonic Conversation between the Director of the Exhibition and the Fascist [1/18], a symphonically-conceived Foxtrot [1/19] brings the scene, and the first act, to a spectacular close.

Scene 3: A Street in the Same City

The third scene is relatively short. It is set in a street in the same city, and opens with a hectic galop for the Mime of the Agents Provocateurs, then builds intently to a climax depicting their Provocation and Arrest [1/20].

The fourth scene takes place in the Worker's Stadium, and begins with a march depicting the Procession of the Workers to the Stadium, along with a Dance of the Young Pioneers, followed by Sports Games [1/21]. The Football Match [1/22] is a vividly non-graphic representation (perhaps influenced by recent sporting evocations from Honegger and Martinů), in which the opposing teams forcefully act out their cultural and ideological, as well as sporting differences.

After a capricious intermezzo, entitled Everybody amuses oneself in one's own way [2/1], comes the Dance of the Western Komsomol Girl and Four Sportsman [2/2] with its nonchalant woodwind solos over a 'walking bass', building to a climax of Tchaikovskian amplitude. The strenuous string writing that opens Sports Contests mounts across the whole orchestra as a Joint Sports Dance [2/3] ensues. A lively interlude for the Scene and Exit of the Soviet Team [2/4] brings the second act to an uncertain close.

Tahiti Trot [2/5] (an arrangement of Vincent Youman's song 'Tea for Two' made in 1928) provides a winsome entr'acte.

The fifth scene opens with an insistent Chechotka (Tap Dance) which promises 'Shoe Shine of the Highest Grade' [2/6]. This is succeeded by a moody Tango [2/7], and then the xylophone-led Polka, entitled Once Upon a Time in Geneva - 'Angel of Peace' [2/8], that has long been the most famous number. The Eccentric Dance that follows alludes to 'The Touching Coalition of the Classes, slightly fraudulent' [2/9], before Entrance of Diva and the Fascist; Their Dance [2/10] provides the ballet with its last such set-piece. An elaborate Can-Can [2/11] then drives the scene through to a high-powered ending.

The stark plangency of the Prelude [2/12] at once confirms a shift in dramatic emphasis. There follows the Scene of the Freeing of the Prisoners [2/13], whose numerous sections run the gamut of sardonic expression in their underpinning of events on stage. A series of hammered rhythmic gestures climaxes with the Total Unveiling of the Conspiracy, in which the Soviets triumph over The Bourgeosie in Panic [2/14], as dissonant writing for strings and brass collapses into disconnected phrases. The Final Dance of Solidarity [2/15] brings the scene, and hence the ballet, to an apotheosis in which the triumphal and bombastic become blurred to notably ominous effect.