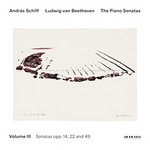 and expressed their high expectations for the edition as a whole, with Le monde de la musique saluting Schiff as one of the "great Beethoven interpreters of our time." Michael Church's remark on Volume II of Schiff's cycle in The Independent applies no less to this third instalment: "These are early works, but he shows them to be fully fledged masterpieces: their contours are sharpened, and their emotional depths plumbed, with each becoming a musical drama."

Schiff's concept to approach the sonatas in strict chronological order proves especially successful in this volume which combines the four smaller sonatas opp. 49 and 14 with the brilliant op. 22, all composed between 1796 and 1800. "It's fascinating for me to reconstruct this creative arc as though I were taking an overview of it for the first time, and assembling it into a large-scale narrative", says the pianist in the introductory interview with Martin Meyer printed in the CD-booklet.

In an interview for the Swiss magazine Musik und Theater Schiff recently once again laid out his reasons to record the sonatas live in the Zürich Tonhalle: "I'm fully convinced that vivid performances are possible only in front of an audience. I obviously don't share Glenn Gould's opinion that concerts are superfluous and that work in the recording studio is so much more important. Being an artist you live for those very moments when music really happens." Schiff plays every programme in 15 different cities before recording it: "I really feel that my performances get more mature from concert to concert. The repetitions are a very valuable lesson."

Schiff's Beethoven cycle on ECM New Series will be continued in spring 2007 with Volume IV including the sonatas opp. 26, 27 and 28.

On the concert platform Schiff will start performing the concluding eighth Beethoven programme in November 2006 while the seventh was recorded by ECM in May this year.