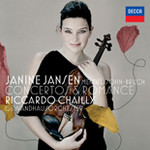 'If one had to evoke the Dutch violinist Janine Jansen in a word, it would be energy.'
The Times

'The richest, the most seductive [violin concerto] was written by Max Bruch. But the most inward, the heart's jewel, is Mendelssohn's.'
Joseph Joachim, violinist, 1906

"With the best setting Decca can lavish on her, and sterling support from Leipzig's Gewandhaus Orchester under Riccardo Chailly, Jansen does not disappoint. How deftly she finds the heart of Mendelssohn's ever-fresh score.
The first movement is allowed to soar but there are also spells of telling reticence - the Andante sings its heart out and the Finale frolics in the fairy dell the composer made his own. Bruch's G minor Concerto is not quite so vernal, but it's impossible not to be swept away by its theatrical opening, the swooning sentiment of its second movement and the rustic revelry of its Finale, jauntily underscored by Chailly and his players."
(William Dart NZ Herald Feb 2007)

Violinist Janine Jansen records 'the heart's jewel' in Mendelssohn's city with the orchestra which premiered it.

'If one had to evoke the Dutch violinist Janine Jansen in a word, it would be energy.'
The Times

'Her interpretations seem to flow as naturally from the heart of the music as water from a spring.'
The Times

Janine Jansen has gained a worldwide critical following for her fresh look at the pillars of core violin repertoire, and her intense and lyrical approach to the music. After the successful Vivaldi Four Seasons recording (which was a bestseller on iTunes causing one publication to dub Janine 'Queen of the Download'), Jansen presents her first major concerto album.

The recording, conducted by Riccardo Chailly, has strong historical and musical connections; the Leipzig Gewandhaus Orchester was conducted by Mendelssohn for many years and the group premiered his concerto in 1844. The recording also presents a real discovery, the Romance for Viola & Orchestra, with Janine recorded on disc on viola for the first time.