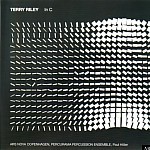 Terry Riley's 1964 masterpiece "In C" is probably the first masterpiece of US minimalism. From Paul Hillier of Hilliard Ensemble reknown comes a new version of this semi-improvised piece performed by mallet percussion and voices.

Terry Riley's 1964 masterpiece "In C" is is probably the first masterpiece of US minimalism. From Paul Hillier of Hilliard Ensemble reknown comes a new version of this semi-improvised piece performed by mallet percussion and voices.

Paul Hillier gives us an interesting new take on a musical icon of the 1960's. Acclaimed as a choral director Hillier is also author of books on minimalist composers Steve Reich and Arvo Pärt, and lives in Copenhagen. With these credentials a vocal take on Terry Riley's minimalist classic In C with Danish forces makes a lot of sense. A vocal version was first discussed with the composer in the mid 1990s, and Riley annotated a score with 'sacred syllables' for the singers to use. It has taken ten years for the project to come to fruition, but the wait was well worth it.

The new recording of In C has been made by Paul Hillier (below) with the twelve-strong early and contemporary vocal goup Ars Nova Copenhagen and the Percurama Percussion Ensemble, and it is a sign of the times that this outstanding new release is on Ars Nova's own record label. In this vocal version the pulse normally played as a High C on a piano is played by a single marimba, with support from seven other marimbas (one bass), and a vibraphone and Bali gong, with both vocal and percussion parts undergoing polyphonic transformations. This new take on In C is composer authorised and works beautifully by adding new textures to the original. The percussion parts are difficult enough to play, yet the Ars Nova ensemble deliver the vocal lines with an accuracy that is quite breathtaking.

This is timeless music in more ways than one. The designer of the appealing Bridget Riley influenced sleeve had the bright idea of including old photographs of all the performers in 1964, the year that Terry Riley composed his masterpiece. But such is the youth (and talent) of the performers that many couldn't supply photographs - simply because they weren't born in that year."

"Because Terry Riley's 1964 minimalist manifesto In C can be played by any combination of instruments and any number of instrumentalists, no two performances are alike. However, the present recording differs from previous versions in that the performing forces encompass a vocal group and a percussion ensemble consisting of eight marimba players and a vibraphonist who doubles on Bali gong. The score's 53 melodic patterns can be repeated as many times as desired in any octave transposition, at any dynamic level, in unison or in canon (the present recording times out to 55:19). This opens up a wealth of textural possibilities that particularly lend themselves to the human voice's expressive potential.

Under Paul Hillier's direction, the Ars Nova Copenhagen intones Riley's patterns using a wide palette of articulations (for this version, Riley underlaid the notes with vocal symbols derived from sacred texts). The singers sensitively employ treble and bass registers, head and chest voice techniques, and both sustained and percussive phrasings. The voices and mallet instruments interact beautifully. Even the steady "pulsing" C-natural upon which everything hangs (provided by a single marimbist) proves a shapelier, more dynamically varied presence than usual.

In short, we have a fresh, compelling, lovingly executed, and gorgeously engineered interpretation that all In C fans should hear. Ars Nova provides convenient access bands at 10-minute intervals, plus booklet notes by Paul Hillier that give insight into the genesis of and philosophy behind this project." 10 out of 10 CLASSICSTODAY.COM [2/8/2007]