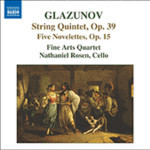 Genial Glazunovians will enjoy the wares on offer.

Much of Glazunov's chamber music radiates a bonhomonious and relaxed avuncularity hard to dislike. The 1881 String Quintet for instance, written on two-cello, Schubertian lines, cleaves strongly, resiliently and ultimately successfully to lyric models without ever quite persuading the listener of any great independence of spirit, or true memorability. Genial and unhurried, the Fine Arts with Nathaniel Rosen take it, justly, at face value. Phrasing is warm and affectionate; rhythms are moulded and not detonated; homogeneity of string tone ensures a capacious sound. The scherzo's guitar imitations by way of violin pizzicati bring varied colour. And the movement's broadening is forceful and adept and the trio offers sufficient contrast to keep the ear interested. The lyric and songful slow movement stakes no claims to the lachrymose or to profundity. Certainly the most Russian of the movements is the finale though it's interrupted by a sprightly if ultimately academic fugato that tends to divert the current of vibrancy that has been established.

Coupled with the Quintet is a far better known work, the Five Novelettes, one of which was given a its disc premiere back in the First World War by the London String Quartet but which was most memorably inscribed by the Hollywood. That classic is fortunately still with us on Testament SBT 1061 where it shares all-Russian disc space with Tchaikovsky and Borodin. No one has yet managed to shake my allegiance from this but the Fine Arts give a good account of themselves in their less glamorous way. They manage to find a degree of transparency in the Alla spagnuola with its lightly tinted Spanish influence, and do justice to the breezy folklore of the Orientale. Any quartet worth its salt will need to evoke the richness of Borodin in the Interludium and the first violin, Ralph Evans, takes on the Eastern Orthodox declamation well. The finale's Hungarian spirit is really only a superficial one but the pizzicati are lightly done nevertheless, and the theme's similarity to Yankee Doodle is as strong as ever.

As suggested the performances are sympathetic and accomplished and the recording allows plenty of detail to register without becoming clinical. Genial Glazunovians will enjoy the wares on offer.

Music for Cello and Piano