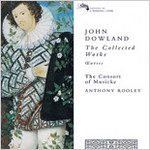 '...this box cannot be recommended too highly' The Penguin Guide To Compact Discs

The success of the Sting album 'Songs From The Labyrinth' has helped re-awaken interest in the English composer John Dowland, one of the greatest composers of the reign of Queen Elizabeth I.

This acclaimed 12CD box of Dowland's collected works with Anthony Rooley directing the Consort of Musicke is now re-released in response to many requests from the trade and the public. The box contains the First, Second, Third & Fourth Bookes of Songes, the song collection 'A Musicall Banquet', the keyboard transcriptions, all the lute music and consort music as well as everything else written (and supposedly written) by Dowland. Also included are works by several other composers who contributed to the song and lute collections.

Honey from the Hive
more suggestions…