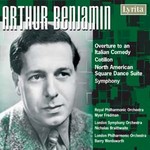 "This is an absolutely superb issue and I count the symphony as a major discovery. This disc will certainly feature on my shortlist of recordings of the year"
(MusicWeb May 2007)

"Having not heard any rival versions I can only urge you to hear this symphony in whichever version you can find it. It does everything a good symphony should, and more besides. There are three orchestras and three conductors involved in this Lyrita retrieval. Needless to say the recording operates at the level once referred to as "demonstration quality.""
(MusicWeb Nov 2007)

"This represents a cannily put together collection. This is the first ever issue of these versions of the North American Square Dance Suite and the Symphony. They have been 'in the can' since the early 1990s. The Overture was issued in the early 1970s on Lyrita LP SRCS 47 alongside other 'Lyrita Lollipops' by Delius, Walton and Bliss. Cotillon derives from a 1980s Lyrita LP: SRCS 115. Both the overture and Cotillon can also be heard on a mixed Australian light music collection on ABC.

Benjamin was Australian but spent most of his life in the UK with the odd sojourn in the USA. Lyrita are renowned for their attention to neglected British music yet here they are with the second recording of the Benjamin symphony. It's not out of order. Benjamin was an adopted Brit and his creativity and career were bound up with the life of the British Isles.

The disc also serves to point up two aspects of Benjamin's music: the light and the serious. He wrote many light pieces amongst which the most famous are the Jamaican Rumba and San Domingo recently featured with other light pieces on ABC Classics. On the other hand he produced a steady flow of serious works including operas, concertos for violin and piano, a Ballade for strings and this Symphony.

Myer Fredman's version of the Overture to an Italian Comedy with the RPO is a 'Lyrita lollipop' from an early 1970s LP. Joseph Post on an even earlier ABC CD directs a performance with rougher edges. It lacks the zip of the Lyrita and for that matter of the vintage Frederick Stock/Chicago version on Biddulph. The work explores territory familiar from Barber's School for Scandal overture and two overtures by Benjamin's friend, Bax: the peppy Work in Progress and Overture to a Picaresque Comedy. It is no surprise to hear that the Benjamin used this as an overture to his own opera Prima Donna.

From effervescence to neo-classicism: Cotillon is based not too tightly on original eighteenth century dances. You will know what to expect if you are familiar with Moeran's Serenade, Rubbra's Farnaby Improvisations, the outer movements of Finzi's violin concerto and the full orchestral version of Warlock's Capriol Suite. There's a dab of Pulcinella here and a touch of tenderness there. Patrick Thomas in his ABC recording is more successful than Del Mar in conveying the sheer zest of this work. The North American Square Dance suite - no doubt recalling his West Coast Pacific years - is a playful charmer although its fizz is in some cases a little lacking in bubble.

The Symphony had its first commercially issued recording courtesy of Marco Polo. This was 8.223764. Dedicated to RVW, this work was a product of Benjamin's Vancouver and Oregon years, written during the summer holidays of 1943, 1944 and 1945. He said that it was intended: "to mirror the feelings - the despairs and hopes - of the times in which I live." It is a classic war symphony that in the present recording can at last stand fully tall.

My expectations were high having first discovered this deeply impressive piece through a tape of fragmentary acetates of a truly electrifying performance (BBCSO/Boult) cutting through the primitive 1940s recording. The symphony itself is heavy with dark clouds, drama, grimness and heroism lit with an occasionally light-hearted spirit. It has something of the atmosphere of Walton's First and VW 4, 5 - a work for which Benjamin had the highest regard - and 6. One might loosely associate this work also with the Hubert Clifford Symphony (Chandos), the Bernard Herrmann Symphony (Unicorn; Koch), the Arnell Third (Dutton) and the Alwyn First (Lyrita, Chandos, Naxos, Dutton).

The Marco Polo sound for Lyndon-Gee conveys a natural concert hall effect with plenty of impact. I would have preferred though a greater emphasis on the strings, but, that very minor quibble aside, this was a satisfying recording.

Wordsworth's version has more choking gravitas and sturdily emphasised tension - as dark a performance as I have heard. Mind you my comparison pool is not large: from the Boult-conducted (or is it Benjamin or Barbirolli?) fragmented acetates to the 1980s broadcast by Patrick Thomas with the Sydney Symphony Orchestra. The massively effective expansive gait of the Lyrita version contrasts with Lyndon-Gee's headlong ardour. Wordsworth's approach works consistently most especially in the broad Adagio Appassionato third movement with its cauldron of the emotions. Other works' influence can be heard including in the first movement: the Tallis Fantasia (11:30 in I) and the Roy Harris symphonies of the early 1940s - stigmata also carried in John Veale's wonderful First Symphony. The Benjamin symphony is a most potently charged work. That sturdy chant-undertow theme opens the work with a tidal surge. It also acts in various forms as an irresistible instigator-hortator throughout - a truly inspired idea. The finale is one of rhythmic splendour and brilliance albeit in dark gemstone hues. True to symphonic majesty-tragedy the undertow theme returns to crown the proceedings.

Benjamin's light and serious sides are here generously represented in vivid performances and with superlative recording qualities to match."
(Recording of the Month MusicWeb March 2007)

Stanford: Irish Rhapsody No.4 / Funeral March 'the Martyrdom' from Becket / Piano Concerto No.2 in C minor