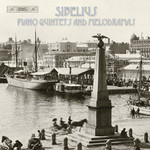 Apart from Voces intimae, his final string quartet, the chamber music of Jean Sibelius has been rather over-shadowed by the orchestral masterpieces.

Recently, however, research into the composer's manuscripts and, not least, a number of recordings on BIS have brought this music to a wider audience. On the present disc, three works for piano quintet are combined with four pieces that combine voice (in the shape of recitation as well as song) and instruments. The largest single work is the Quintet in G minor, which with its duration of 38 minutes is 'undeniably one of the most impressive of all his chamber works, and one in which Sibelius strove for a new ruggedness and severity of mood', according to the informed liner notes by Andrew Barnett, whose biography of Sibelius is soon to be published by Yale University Press. As the fourth of the Quintet's five movements Sibelius wrote a Vivace, which was later replaced. This can also be found on the present disc, as well as the slightly earlier 'Andante – Allegro' for the same forces. Among the remaining works, The Watersprite was one of Sibelius' first publicly performed pieces, composed in the same year as the setting of his childhood friend Ellen Hackzell's short poem Oh, If You Had Seen. Equally brief, but written almost 40 years later, is A Lonely Ski-Trail, with the more substantial 'Melodrama' from Nights of Jealousy, another early piece, rounding off the programme.

Among the performers are Folke Gräsbeck and Jaakko Kuusisto, whose performances of the music for violin and piano (BIS-CD-1022 and BIS-CD-1023), as well as the piano trios & quartets (BIS-CD-1182, BIS-CD-1292 and BIS-CD-1282) have been highly regarded by the reviewers: 'Enchantingly drawn accounts... Chamber music making as it should be done' was the verdict on BIS-CD-1292 (Gramophone). The disc also features acclaimed Finnish mezzo-soprano Monica Groop and Lasse Pöysti, doyen among Finnish actors.

View the listing of Sibelius releases on BIS

Music for Cello and Piano