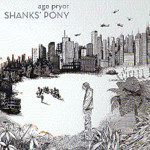 "…oh you're a love gone wrong survivor/you know what you want but you don't know where to find her/oh you're a creative visualiser/lighting up the skies with your love of life/you send us all flying with your love for life/one of these days your love will bring us all together…"
- Age Pryor, lyrics taken from 'Shanks' Pony'

Singer / songwriter Age Pryor is riding Shanks' pony to deliver an album that heralds a fresh age of folk in New Zealand! Aptly titled 'Shanks' Pony', the album is the anticipated follow up to his '03 debut 'City Chorus', and the hugely popular 'Fly My Pretties' series, of which he was an integral part.

The Wellington-born raconteur is a founding member of the Wellington International Ukelele Orchestra, and was considered one of the standout performers of the 'Fly My Pretties' musical experience.

'Shanks' Pony', seemingly appearing like a wildflower among Wellington's concrete jungle of dub, funk, reggae and skank, was given to Daniel Best of Berlin music label Sonar Kollektiv. His take on the album? "It's folk, he should be proud of that, folk is an important genre!" Age Pryor comments: "In Europe, I'm told that folk is experiencing a resurgence, it's current and it's taking a contemporary form."

He goes on to add "'Shanks' Pony' is an extension of what folk has always been: a grass roots commentary on our day to day lives and on the experience of living. Today there is a real need for a return of songs, a return of commentary, a return of honesty, because there's a sense of dislocation, politically and socially, that for the last 10 to 20 years hasn't necessarily been expressed."

The core band of class musicians who worked with Age Pryor on 'Shanks' Pony' are Justin Clarke on guitar, Peter Hill on bass, Darren Mathiassen on drums and Luke Benge, who recorded keyboards before relocating to Melbourne.

The stunning artwork for 'Shanks' Pony' was created by fellow Wellington artist and film director Taika Waititi. Their long-standing creative partnership led to one of Pryor's tunes ("I Don't Want") appearing in 'Eagle vs Shark', the debut feature film by Waititi. A new studio recording of '"I Don't Want" is the opening track on 'Shanks' Pony', and the album features studio versions of two of Age Pryor's Fly My Pretties songs, namely "King Of You All" and "Shouldn't I Know".

There's some pretty serious media awareness underway as we speak, with Age Pryor's underground promo team pulling out all the stops to get 'Shanks' Pony' into the hands of the folk who can make a difference!

The Return of Fly My Pretties