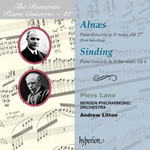 'Despite the obscurity of this music, Piers Lane plays it with confidence and insight. The Bergen Philharmonic, under its music director Andrew Litton, provides solid, stylish support and the recording is spacious and ideally balanced' (Daily Telegraph)

"Hyperion's engineers have captured the proceedings in warmly resplendent sound, fully in keeping with the music. Lovers of this type of repertoire can buy with confidence, particularly for the Alnaes, here getting its premiere recording."
(MusicWeb April 2007)

'For the 42nd issue in its 'Romantic Piano Concerto' series, Hyperion turns for inspiration to Norway, and, in a first recording of Eyvind Alnaes's Concerto, they light up the sky like an aurora borealis … Such music is heaven-sent, particularly when played by Piers Lane with such enviable poetry, fluency and aplomb. Few pianists could have entered into the romantic spirit more infectiously … Andrew Litton and the Bergen Philharmonic are a perfect foil for their scintillating and indefatigable soloist, and Hyperion's sound balance is impeccable' (Gramophone)

'The performances, with Piers Lane as soloist and the Bergen Philharmonic conducted by Andrew Litton, are jaw-droppingly good - so much so that any qualms you may have about the works themselves are swept aside by the sheer excitement of it all' (The Guardian)

Hyperion goes to Norway for this one-and rightly so as the recording reveals that there's more to Norwegian Romantic Piano Concertos than Grieg in A minor. While Sinding is at least a name to most people (if only for The Rustle of Spring) Alnæs is almost completely unknown outside his native land, yet it is perhaps this latter's concerto which makes the bigger impression. This is a glorious late romantic work in an idiom akin to Rachmaninov; indeed there are passages which seem to quote the Russian's fourth concerto-except that the Alnæs was written first. Did Rachmaninov perhaps hear an early performance?

The Sinding is a monolithic three-movement work where all the material is based on one theme which undergoes many Lisztian transformations. The piece is hugely virtuosic, some may say bombastic-but some may also say that's what this series is about-and it's all good fun!

Hyperion are delighted to continue their relationship with Andrew Litton as the new principal conductor of the Bergen Philharmonic and here he is joined by RPC stalwart Piers Lane in his sixth contribution to the series.