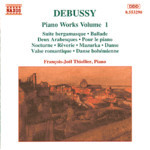 "I am fascinated to see where all this leads as Thiollier gets on to mature Debussy. In spite of two or three failures, the inevitable result perhaps of a refusal to play safe, he has brought the composer's early efforts to life wonderfully. I was left thinking of Julius Katchen's way with Brahms: free-spirited, intensely personal yet mostly succeeding because of his empathy with the composer. At his price you shouldn't miss it."
(MusicWeb March 2007)

Franco-American by birth, the pianist François-Joël Thiollier was born in Paris and gave his first concert in New York at the age of five. His teachers included Robert Casadesus in Paris and Sascha Gorodnitzki at the Juilliard School of Music in New York. His eight Grands Prix in international competitions include triumph in both the Brussels Queen Elisabeth and the Moscow Tchaikovsky Competitions. Boasting an exceptionally large repertoire of some seventy concertos, Thiollier enjoys wide international success, appearing with major orchestras and in recital in the most famous concert halls of Europe. At the same time he has made some forty recordings including a release of the complete piano music of Rachmaninov and of Gershwin, and, for Naxos, a world première compact disc recording of the complete piano music of Maurice Ravel.