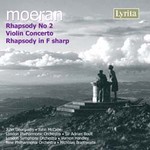 "A fine coupling including some classic Moeran in enduringly rewarding performances and recordings."
(MusicWeb June 2007)

Ernest John Moeran (1894-1950), still the least-known significant English composer of his generation, composed in his prime three large-scale works with orchestra, a symphony (1937), a violin concerto (1942) and a cello concerto (1945). Part of Moeran's neglect may perhaps be attributed to his derivative musical style. Yet the positive individuality of Moeran's music, which grew in strength as he became older and is finally shorn of all props in the masterly cello concerto, overrides these derivations in nearly all his works. He is a composer with something to say and an unwavering judgment about the way in which it must be said.